1V0-701 Bundle gives you unlimited access to "1V0-701" files. However, this does not replace the need for a .vce exam simulator. To download VCE exam simulator click here 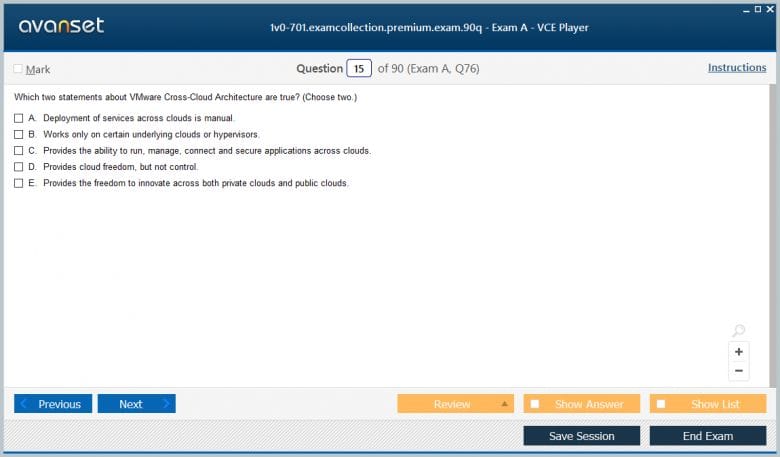 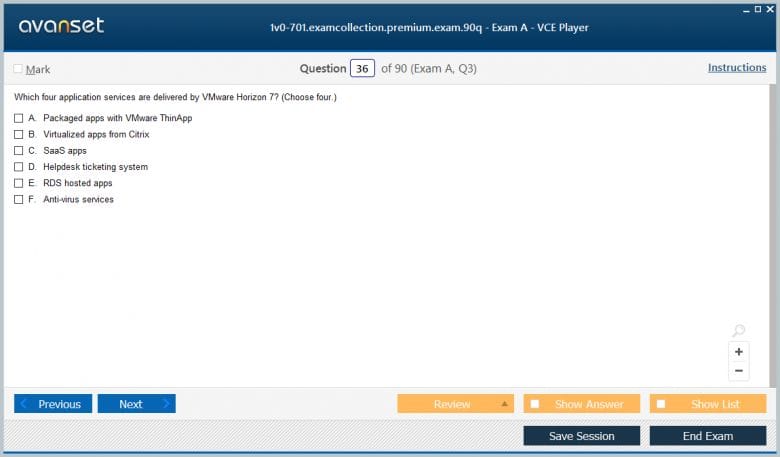 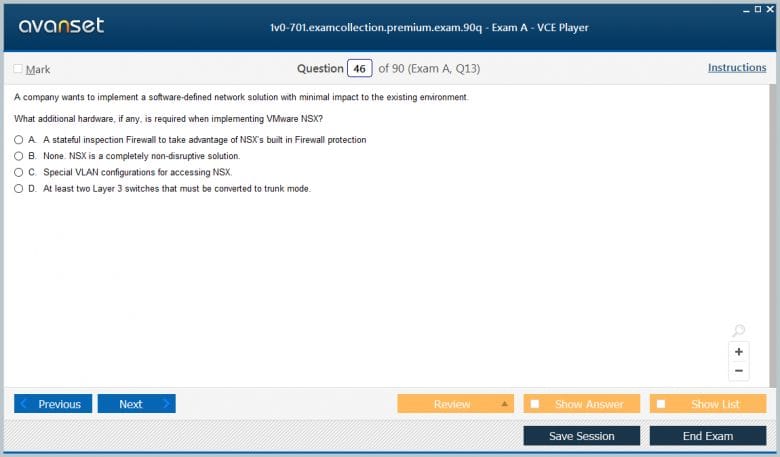 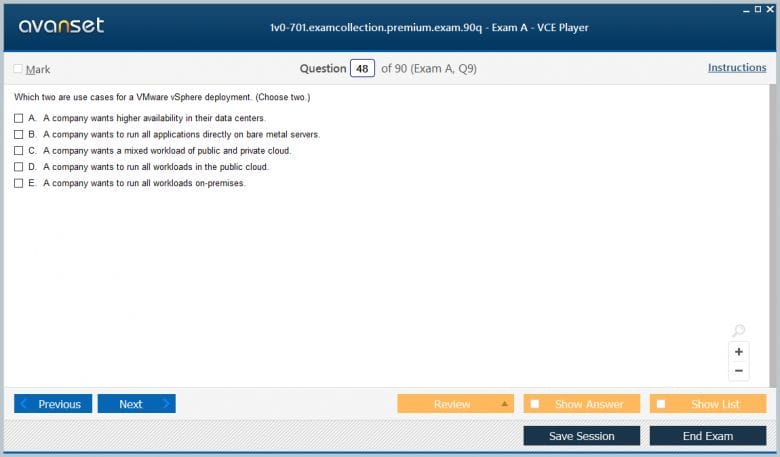 In this video, I'll explain the role of VCenter, the Platform Services Controller, and how they are used to manage our ESXi hosts. So here we see a little diagram, and basically the point of this diagram is to illustrate that V Center is used to manage our entire VSphere environment. So in the big green box here, that represents V Center, and then within it, I might have multiple virtual data centres that include ESXi hosts, virtual machines, data stores, virtual switches, and all of these different components that make up my virtual data center. But VCenter is the top level of administration. I can use it to manage many ESXi hosts at once. My Vsphere Web Client is also hosted by Vcenter. So technically, we could actually manage individual ESXi hosts using the VSphere client. But as the environment continues to grow, this starts to become really impractical. So VCenter gives us that central management system so that we can control everything at once from one unified web client. And not only does VCenter give us our central management capability, but it also makes certain features possible. You can't do V. Motion storage, motion high availability, fault tolerance, storage DLS, and many other features require a data centre to be available. So V Center is not just a management platform; it unlocks a lot of capabilities that are not possible if we choose to not deploy V Center. So we have a few different options for how we can actually create our VCenter server. There's the VCenter Server appliance, or we can deploy VCenter on a Windows machine. And the first option is to set up a Windows virtual machine and install V Center on it, so we can install the centre on top of any of the supported versions of Windows. This does require a Windows license, of course, and because it's running on a virtual machine, we can protect VCenter with either high availability or fault tolerance. So we can give ourselves the ability to recover from the failure of an ESXi host. Now, we could also potentially deploy VCenter on a physical server running Windows, and this gives us complete segmentation of management. We've got our management server running on a separate physical device, and this might be required for compliance purposes, but it's usually not recommended because we can't protect the physical server with high availability or fault tolerance. So it doesn't have the same level of redundancy that a virtual machine would give us. Now, an option that's becoming more and more popular is to configure a VCenter Server appliance. And the VCenter Server appliance is a prebuilt, preconfigured virtual appliance that's designed to run VCenter. Basically, you download it, you import it to run on an ESXi host, and you immediately have a complete VCenter configuration that is very easy to install and very easy to upgrade, and it's a virtual machine that can be protected with high availability or fault tolerance. And we don't require a Windows license. So traditionally, the Windows Vcenter has been more popular because it has a higher set of features. It was compatible with additional databases. It could support more virtual machines and more ESXi hosts. But now we have feature parity between the two. So you may need to know a couple of things about the supported databases really quickly. The Windows version of VCenter supports Microsoft SQL, Oracle, or a bundled database. The bundle database can be scaled up to a maximum of 20 hosts or 200 virtual machines. Whereas the V Center Server appliance does not support SQL, it supports Oracle, and it also supports an embedded database. And that embedded database is just as scalable as any of these external databases are. So now the V Center Server appliance with an embedded database scales just as high as any of the other options do. So for the purposes of the VMware Certified Associate Exam, what you really need to know is, number one, that VCenter provides our central management system for all of our ESXi hosts, all of our virtual machines, and all of our data stores. You also need to know that Vcenter is required for certain features like high availability, fault tolerance, and a distributed resource scheduler, and you need to understand that it's used to manage our physical ESXi hosts. So those are the actual hosts. That's my virtual machine.

CAn we pass with free dumps

@Hendrixx24, these dumps for 1V0-701 exam are effective tool to pass your main VMware assessment…..and in combination with the VCE Player they create wonders…you’ll succeed, of course, if you take this process seriously….

@ellis51, usiing these questions and answers for vmware 1V0-701 exam is a good move. these dumps are the most updated and will help you understand all the concepts assessed in this exam. they’ve helped me pass!! wish you luck:-))

I will take this vmware exam in a month and so am here to collect some materials. does anyone know whether 1V0-701 practice questions and answers will be useful?

@Bodhi, yes, they are and i can confirm it! i have just received my results. credits to 1V0-701 exam dumps, i‘ve passed easily! these files are actual. they will surely be of help to you… goodluck!

can someone please confirm whether 1V0-701 practice tests are still valid?

hi
is this Dump still valid ?

hi, is the premium file valid? thanks 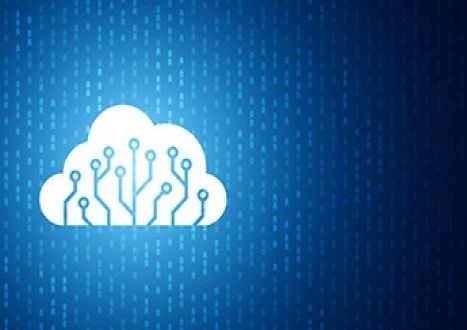 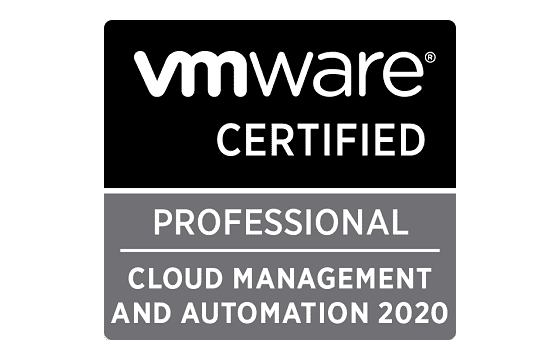 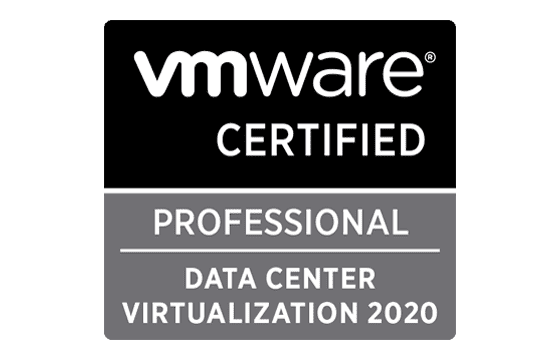 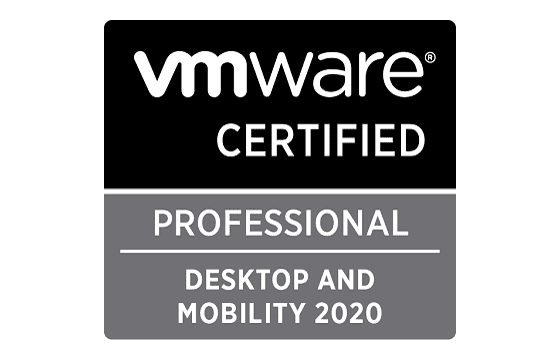 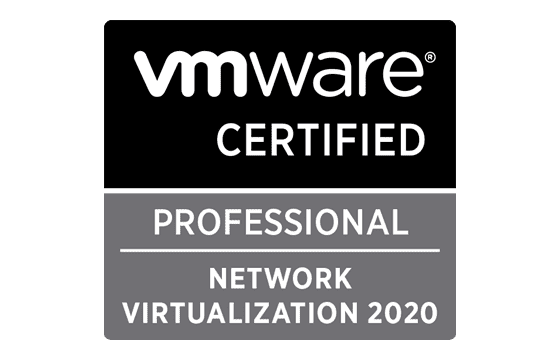