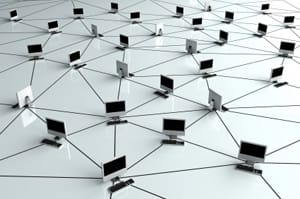 The major role of the network is to make the resources available for the end user. The end user doesn't know the network functions and they really don't like to learn it. The end users will requires emails and documents to perform their daily job related tasks. While at the same time, it is necessary to be aware of most recent networking technologies to make the available resources transparent to the end users. In order to facilitate this, it is essential to employ a variety of methods to make an efficient network. Here listed are some of those methods and reasons for its uses.

The QoS means quality of service which refers the ability to give different kinds of traffic flows with different kinds of services via networks. On the other hand, some kinds of traffic will get a custom and priority queuing via the networks. This kind of service is useful for the voice, data and video applications which must keep the consistent data flow to function properly. With the best QoS, even the congested networks will manage these kinds of applications.

This service allows to strategically optimize the network performance for select traffic types. An FTP type file transfer is less latency sensitive when compared to the voice over IP.

The traffic shaping is the QoS strategy intended to enforce the prioritization policies on the data transmission throughout the networks. It is designed to optimize the network performance and to reduce the latency by controlling the amount of data which flows out and into the network. The network traffic is categorized, directed and queued according to the network policies. The traffic shaping includes delaying the data flow, which is designated as very less essential when compared to other kinds of traffic streams. This technology will slow down the traffic flow that does not require whole bandwidth in the way it was used. It also increases the bandwidth of the traffic flow that requires it.

Now, todays networks consist of multiple connections from a destination and a source. The reason behind this kind of configuration is a load balancing. While more than 1 path available from the source to destination, use every multiple paths to spread out a traffic flow by maximizing the available bandwidth on every connection. It is normally established with the help of routers or multilayer switches. The most recent types of load balanced used in today's networks such as DNS, internet relay chat, FTP and websites.

The load balancing lightens a load on individual server in the server farm and also allows servers to take the farm out without disrupting the access to server data farm. The load balancing improves redundancy and the data availability. Additionally, it increases the performance by supplying the workload.

The high availability is the system design protocol which sets the limit on an unplanned downtime in an assigned time period. An organization that manages significant human lives or amount of money will strive for the very huge availability in the network connections and computer systems. In few organizations, the main goal is to offer 5 nines uptime, that means the system should available 99.999 % of the time. On the other hand, there will be no 0.001 % more than the unplanned downtime. However, there are 525,6000 minutes per year, it equates to the 5.26 minutes in a year.

Peoples as well as computers like to perform same things again and again. The main principle of the cache is to save resources that a user or a device requires to enable it to do a task more faster in further attempts when compared to the first time when the tasks was performed. In case, if most users are accessing the popular sites, the caching engine will be used to maintain the data and links for the site at the location much faster for users to more speed up the performance. This caching engine also used for resources and file internal to the organizations, hence the users will get it when conserving available bandwidth. Anyway, this type of service requires no user configuration and it is more transparent to the a user.

The caching improves the network performance by locally caching the content, by limiting the surges in traffic.

The redundant connections in the early days due to load balancing. For computers, the fault tolerance refers to a capability of the network or computer system to offer continued data availability if a hardware failure occurs. Each component within the server, from a CPU fan to a power supply, has the most chance to fail. Some of the components like processors very rarely fail, whereas the hard disk failure cases are well documented. Moreover, each component has a fault tolerance measures. This measure needs redundant hardware component which will automatically or easily take through when the hardware failure occurs.

Then the primary functions of the fault tolerance measure are enabled a network or a system to continue operates if any unexpected software or hardware errors occurs.

The CARP is the common address redundancy protocol. This protocol, which enable multiple host on the similar network to share set of the IP addresses and also offer failover redundancy. This most commonly used with the firewalls and routers and also offer load balancing. Then the hosts within a redundant group are known as group of redundant. This CARP needs minimum one common virtual host ID as well as a set of virtual host IP addresses.

You can make use of the CARP to deduce the effect of the computer failing when providing the critical service. It is due to another computer which has same address will be used for a service. It is not simply offers for fault tolerance, and it can be used for the load balancing as well. If a computer is running the packet filter & it fails, then it can effectively block most of the communication downstream of them. In case, there are 2 computers which are used CARP to offer the similar service at the same time, in that when a 1 computer fails, then a user will never affected by that because the traffic can be redirected to another computer.

In the uncongested networks, no previously denoted strategies are required. In today's modern networks, the most powerful personal computers are mostly used to download videos, pictures, files and large content work. Due to this load, the best and biggest networks will suffer still from the congestion issue. This will be due to latency sensitivity, large uptime requirements and high bandwidth application. Here listed below are some of the reasons in that.

The latency is defined as a time delay in between the moment while one among the effects become detectable. As in regard with networking, this latency sensitivity is referred to a susceptibility of the service or an application to the consistency or the speed of the network connection. On the other hand, some of the applications, that people using on the network are not so sensitive like other to latency because it do not need an interactive or a real time connection with the user. The other services and applications need a huge degree of more consistent user interaction and so it is defined to have a high latency sensitivities.

Most of the applications that the people using today needs huge amount of relative bandwidth for the application used in earlier days. The kinds of applications, which we used have also evolved. In earlier programs, it simply used batch processing which just requested a set or a list of information from the server and also waited for the response. Then, the people progressed towards an interactive application which has to provide quick answers to the user so that they can make decision quicker and easier. Today, most of the application that people using are real time, and so that the user is listening to, interacting and watching with an application itself. It includes, but not only limited to, video streaming and VoIP applications. The VoIP offers merging of video technology and voice data which allows collaboration of information more easily between personal use and people for business. It also needs the network that supports the bandwidth requirements.

Nowadays, we can able to watch any videos we like and whenever through an internet. And also it covers the happening in and around the world, even in a fraction of a second in own computers. The video applications are available in many forms and in different vendor names which is not important. But the most important things that most of these applications are real time, which needs huge quantity of bandwidth to operate it effectively.

An uptime for the network is a measure of quantity of time that the network systems are available for the users. This is most often used to measure the network reliability and stability. Then greater the uptime denotes a better network for the users. Most of the businesses strive for the 99.99 % uptime of a network and it is an essential component too.

This uptime is also defined as an amount of time period that the particular components have been up and have not been restarted. It is a different definition of the network because to the network uptime, higher is really better. In the same way, an extremely huge uptime for the specific server indicates the negligence. Hence patches and updates more often need a reboot, which will reset the uptime for the particular device.

It is essential to be familiar with the methods to optimize the network performance. The QoS is the one which allows to identify particular traffic flow and prioritize where required. The traffic shaping reduces latency and optimizes performance by redistributing the available bandwidth. The load balancing is the one used a variety of paths for the same traffic flows to maximize the available bandwidth and the high availability is the system design protocol which sets the limit on an unplanned downtime of the given time period. The fault tolerance in networking is the capability to lose 1 connection without losing any connectivity that the user requires. The CARP is the one which allows to run the similar critical service on 2 different devices or computers which shares same IP addresses.