The most of the common computer networks have so many components unless it involved in initial network installation. It is important to verify the network components which have been installed and tested properly. In the following sections, anyone can identify each component of wiring distribution, such as the IDF, MDF, Denmark, Demarc extension, smart jack and CSU/DSU. It is necessary to be familiarized with them and its component concepts of wiring distribution before moving for wiring installation and configuration. 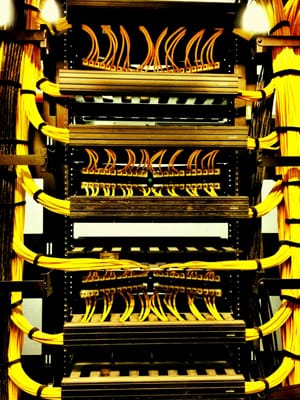 The intermediate distribution Frame is referred as the IDF. In few networks, multiple wiring type closets are used. At that time, the MDF connected to the secondary wiring closets or IDF with the help of backbone cable. It may be fiber coaxial or even UTP. In today's huge speed networks, high speed fiber or UTP Gigabit Ethernet is the recommended media choice. It is often a wire frame which is located in telecommunications room or equipment. This IDF is connected with the MDF which is used to offer a greater flexibility as regard to the communications lines distribution to the building. Ans also in some other way, it's simply a place where a telephone administrator or network administrator can change or mange their mind and to redirect the signals.

It is a wall mounted or free standing rack for cable or wiring from the Main distribution frame and also called as combined distribution frame which leads to individual cables for every piece of equipments such as personal computers, workstations and all other end user devices. This IDF for the exchange offices also contains a termination equipment for a variety of components. This IDF is a closet or remote room connected to mainframe distribution by the fiber optic cable. In the IDF, it is important to find the patch panels and hubs. Components for the backup systems like RAID arrays, hard drives, switches, routers, hubs and routers for connections and networking for coaxial, optic and also other cables. First of all the MDF will enter into the first floor of the building from any buildings or phone company then an IDF would run via walls to every floor where the connections for lines to the individual workstation, personal computers and so on are located.

The contractors are cautioned and not to use an IDF rack for grounding the equipment like test equipment or welding. It is possible that the current and voltage spikes can easily damage the most sensitive electronic equipments when the IDF is not grounded sufficiently to convey an excess voltage to earth. 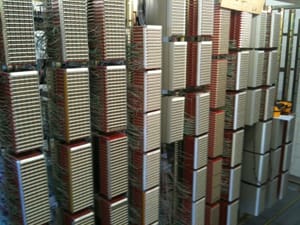 It is referred as main distribution frame which is a cable rack that helps to manage and interconnect the telecommunications wiring between any number of IDF and itself's. Unlike IDF, which also connects the internal line to MDF, it connects public or private lines entering into the building with the internal network. If any enterprise which encompasses building with many floors and have only one centralized MDF on the 1st floor and 1 IDF on each floor which is connected with the MDF. The MDF equipment comprises of ventilation panel, monitor, UPS, library server, fiber patch panel, application server, email server or DNS, 1 to 16 port patch panel, 4 to 24 port patch panels, Ethernet and dial in facilities, monitor shelf with tray, Workgroup server and administrative server.

The NDF is the wiring point which is normally used as a reference point for the telephone lines. It is considered as the WAN termination point. It was installed in buildings as a part of pre-wiring and internal lines are connected to that.

The MDF offers flexibility in assigning facility at a higher capacity and lower cost than the patch panel. Most of the large MDF comprises of long steel rack on both the sides. On the front rack, termination blocks are assembled horizontally on one side of the rack shelves.

The demarc is the short form of demarcation which is the last point of service provider's responsibility. It is the point in the telephone network where maintenance responsibility runs from the telephone providing companies with a subscriber. This is typically located on the box mounted outside of the customer buildings. This box is also called as a network interface device. In telephony, the demarcation point at which public switched telephone network connects and ends with customer premises wiring. It is the line which identifies the maintenance and installation of equipment and wiring. This demarcation point may vary over time and change between the countries too. The MPOE which is referred as main or minimum point of entry is a synonymous of demarc. This is the added implication which occurs very soon when entering into the customer premises. The NID will often serve as a demarcation point.

The demarc varies from service level and building type. It allows safe connection of wiring to PSTN and third party telephone Customer premises equipment. The NID is generally placed on the exterior building in outdoors and placed to access easily by the technician. It also has fuse, lightning arrestor and test circuitry which also allow carrier to test remotely, whether the wiring fault lies in the carrier wiring and customer premises without any need of a technician at the customer premises. When the loop is disconnected due to some fault, the on premises wiring was isolated from telephone network and customer has to contact the technician directly.

It is the one which extends demarcation point to more functional locations. It might sound just simple, but the knowledge involved in the infrastructure needs and cabling distances are huge. This demarc extension is also referred as extended demarc, riser cabling, inside wiring, CPE (customer premises equipment) cabling and circuit extension. This demarc extension is considered as the important factor to be considered for building telecommunication infrastructure.

While troubleshooting, the network administrator will test for connectivity on both sides of Denmark to identify whether there is a problem with external or internal. Then the length of the fiber or copper starts after demarc and still doesn't achieve all the way to the office is considered as a demarc extension.

Most of the cabling companies specialize in upgrading and installation these extensions. It is necessary to consider the office space and important to verify the connections are solid and provides bandwidth and connectivity it requires.

When it comes to signal amplification, this smart jack will amplify the signals. It is similar to the function of repeaters in the Ethernet network. When it comes to remote alarms, the smart jacks are typically adds an alarm which grants the owner to find if anything goes wrong or issue with smart jack and hence the connections are at the demarcation points.

The loopback is the feature which is built into a smart jack. This is used for the testing purposes like Ethernet loopback cable. This feature enables the remote testing hence the technicians are not required to visit the local network area to isolate the problems.

The surge protection will helps to perform the lightening and environmental conditions may cause the electrical surges which may quickly create damage equipment. Most of the smart jack involves protection from the environmental situations.

This device can also provide protocol and code conversion, producing this signal from service provider used by devices on some internal devices such as CSU or DSU.

It is a different type of the network interface device which adds the circuitry. Then by adding this circuitry also encloses features such as supporting remote diagnostics, regenerating the digital signal and converting framing formats into a digital circuit.

The CSU is referred as a channel service unit and DSU is referred as a Data service unit which acts as a translator in between WAN data format and LAN data format. This type of conversion is required because the technology used on the WAN links vary from the things used on LAN's. In point of view, this CSU/DSU is appropriately considered as a type of the digital modem. Instead of that, normal modem is always changing digital signals to analog signals, here CSU/DSU helps to change this type of digital to another format. This CSU/DSU has the physical connections for LAN equipments through the serial interface and also another connection to the WAN.

This CSU is referring to a wide area network equivalent of the network interface card. In the telecommunication it is a line, bridging device which is used to perform the bit surfing, loopback testing. It may also provide the barrier for the electrical interference from both sides of the unit. Along with it, it provides a formatting pattern and framing compatible with a network. It is considered as the last signal at the regeneration point on loop side which is entered from central office before the regenerated signal enters a data terminal equipment or a multiplexer.

This CSU/DSU can also be categorized by class of subject which support DSS, DS3, DS1 and etc. by the capability within the mentioned class. These CSU needs of the PSTN service providers at the digital interfaces which terminates the DSU on the customer side. Then the maintenance capability of the CSU or DSU provides an important guidance whenever the service provider requires to dispatch the repairman to customer location.

The WAN interface card also contains an integrated CSU or DSU, which can be inserted into the router slot. It helps to implement two functions. This CSU/DSU is generally equivalent to the modem of LAN network. It is also responsible for the connection to telecom network when the DSU is solidly responsible for handling the interface with DTE.