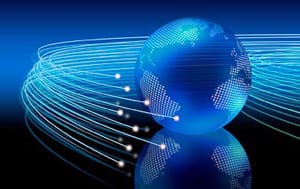 There are many different types of WAN connections floating around in the market today. The decision of choosing one connection over the other will vary significantly upon the services it will offer and the requirements for the organization. The major WAN type and their properties have been discussed in detail below:

T1/E1: Service provider provides you various technologies to stay connected over a wide range of distances. T1 is the most common type of connection used these days in United States and the same in Europe is termed an E1. Through this, you can connect to any two parts of the country and then utilize the same over time. You just need to pay for the connection and once you have done it, it's your connection and you are the boss of it. The bandwidth of this channel can also be divided up to 24 channels.

SONET: SONET technology is a type of protocol which can transmit data at the speed of 150 Gbps by making the use of fiber links but has to be controlled by atomic clocks. The SONET here stands for Synchronous Optical Networking and is very beneficial for the networks which spans to many geographical regions because of the mechanism of atomic clock used in it. This is generally used only by mega corporations for data trafficking.

SDH: The SDH stands for Synchronous Digital Hierarchy and is one of the standards which are similar to the SONET technology. SDH transfers data making the use of optical fibers along with LED or laser light. The capabilities and speed of the SDH technology are quite in comparison to SONET and is also controlled by atomic clocks. It was originally introduced by European Telecommunications and Standards Institute and SONET was defined by American National and Standards Institute. SDH also provides 50 Mbps bandwidth at STM - 0.

DWDM: DWDM stands for Dense Wavelength and Division Multiplexing and is a type of optical technology which is majorly introduced to further increase the bandwidth over fiber optic to overcome the requirements. It functions by transmitting and combining many signals instantly of different wavelengths at the single fiber. A single fiber is in turn turned into many 'virtual fibers' and because of this technique, DWDM is capable to transmit data with a speed of more than 400 Gbps.

Satellite: If some of you don't have access to the coaxial cables, there is no need to worry. The satellite hookup technique is here to help you out. This is one of the most dependable and economical service and you only require a dish antenna along with professional instructions or installer for locating the satellite with the help of dish antenna. Once this step is achieved, you can use the signal as download from internet. Though, uploading becomes a more of a challenge here as there may not be a high power transponder, so you can use the dial - up connection from the line of your regular telephone or some may also provide you DSL line for more bandwidth in uploading.

ISDN: ISDN is very unlikely for real life and there is almost no possibility that you will encounter it in use these days. ISDN has two important aspects i.e. ISDN BRI and ISDN PRI. ISDN BRI has protocol of layer 2 which allows it to communicate between two channels and a controlling channel. The channel responsible for communication is bearer channel and for controlling is the delta channel. Each of these bearer channels can carry 64 Kbps data and delta channel can carry 16 Kbps for better data control. ISDN PRI came out way later and is very similar to a T1 line and contains 23 bearer channels and one delta channel both with speed of 64 Kbps.

Cable: The cable companies now provide you a path to access internet beginning from connecting your computer with cable modem. The modem is also configured by the company and is recognized at the central office called headend. From there on, the company is now your official service provider guiding you for internet access.

DSL: this is an inexpensive option for home users and small organizations which provides good bandwidth at cheaper rates. DSL stands for digital subscriber line the most common form of this technique these days is asymmetric DSL or ADSL. The line for such connection is already there in the form of telephone lines, so this connection is the cheaper way to access internet.

Cellular: The cellular technology has the latest 4G technology in the market and can provide the speed of 100 Mbps, which is faster than many of the other service providers and can be used as a backup line or the primary internet option as well. May of the companies also provide you provision these days to set up your own private network and give access to others as well and GSM along with CDMA are prominent methods of setting up a cellular connection.

WiMAX: It stands for Worldwide Interoperability to Microware Access and is a telecommunication protocol which can be used for many applications like broadband connection and it can also allow you to use the network at a much greater distance than the traditional Wi-Fi. It is also cost - effective and can deliver speeds up to 40 Mbps.

LTE: It stands for a long term for evolution format and is widely accepted as the international standard. It is still under construction even at this time of writing, but when released, it will be offering 100 Mbps speed through wireless links for mobile phones, computers and PDAs. It will be a standard 4G connection and an enhancement of 3G standards.

HSPA+: HSPA is an acronym for High Speed Packer Access and is wireless broadband standard used by many vendors for accessing internet through PDAs and phones. It is also known by Evolved HSPA and provides a speed of data link at 22 Mbps up and 83 Mbps down.

Fiber: the fiber cable optic is an essential element of networking for higher bandwidth and reliable connections. Many companies offers these fiber cable connections directly to user's desktop and can be used for delivering internet speed of about 150 Mbps and it has a limited availability. It is available in both wired and wireless connecting terms.

Dialup: The major benefits of this technology are cheaper cost and availability because almost everyone has telephone line these days but it does not have a much larger bandwidth that we all crave for in the computer these days. It is also known as plain and old telephone services or sometimes also known as public switched network telephone.

PON: A passive and optical network technique, PON is a transmission from point to a multi point fiber to a premises network which allows single fiber cable optic to serve many premises. These premises can either be business or home. With the advancement in technology, more and more customers are using this technology for connecting to internet.

Frame Relay: many organizations have their different sub - locations spread over an extensive geographic section and want to connect each of those locations together, this can be done either by dedicated lines which can be quite expensive or by using special routers and switches through which it can be connected to any point. This technique is called frame relay because it makes use of layer 2 frames that are relayed to switches and routers.

ATMs: Here, ATM is acronym used for asynchronous transfer method or mode and is a type of protocol which was introduced after Ethernet and provides much more reliable way of transmitting data that the Ethernet. It was developed in 1980 for data and voice applications. Using fixed cell instead variable length cell for more efficiency and is now becoming even faster.

Circuit Switch: The assets of a WAN technology provide the happening of events in the attribute of the communications. Dialup lines are essential components of a circuit switch. Once you make a proper connection on network switch, the whole data traffic will be sent over to physical connection until it gets terminated.

Packet Switch: They are very different from circuit switch because a single data packet can take an entirely different route to final destination during transmission process. The newer techniques in the packet switch technology make use of frame relay technique and virtual circuits for avoiding errors and improving the efficiency.

Speed: The speed factor for any connection depends on the available bandwidth along with data throughput. A single T1 connection doesn't guarantee you fast speed and depends on different factors. Bandwidth for slowest link determines the speed of the network. Factors such as Ethernet switch and the building or construction factors also take into account for overall speed of the network.

Transmission Media: The transmission media is the carrier upon which communication happens to be carried out. This media can be anything like glass, copper or maybe even wireless. Bandwidth requirement is the major factor that makes way for the media required along with factors such as EMI concerns, distance the data will be sent to before encountering another router and the security factors and the same is being taken care of by the service provider.

Distance: Distance is a measure of how far the data needs to be sent. Generally fiber optic cables are an ideal choice for transmitting data over a wide range of distance because it has a very low attenuation rate as that can be found in case of copper cables. This is because of the fact that signal is being sent via light than electricity.

You should be able to recognize various types of WAN technologies, know their advantages along with disadvantages and the major areas that they will found their use. You should also be able to categorize various WAN properties, understanding the difference between them. So, these are some of the best technologies and factors affecting them that you will need to take into account before the connection.