Basic idea behind connecting various computers together has remained more or less the same for quite some decades now but the methods that is used for connecting them has varied drastically. Many of the technologies now in common practice for the purpose of connecting computers have only evolved within the last 40 years and looks like the technology will continue to progress in the near future as well. The components used in the networks are also evolving because of this advancement in technologies. When setting up a connection between computers, the main aim behind the process is to set up a connection with faster communication along with least errors. However, it is mandatory to note that the media components and the type of topology used in the network sets up if you will attain this goal or not. Also, these components in the network will also be responsible for controlling the network traffic. Below are discussed some of the basic media types and its associated properties which are best suited for connection setup and network trafficking control. 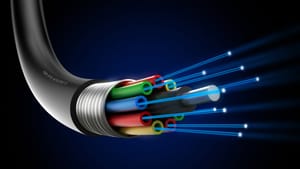 Multimode: MMF cables or multimode fiber optic cables makes use of light for communicating the signal and then dispersing it into several paths. This diversion in several paths is the reason why these cables are known as multi mode cables. The light ruptures fast throughout the core and gets reflected back through cladding which is a different kind of material which is in line with the core and reflects back the light onto it. These cables are suitable as they are beneficial in providing high bandwidths and at high speed over a long distance, generally about 3500 feet but may become inconsistent for long runs. Due to this reason, these cables are generally used for lesser area of the building. Another advantage is that these cables are available in plastic or glass version which makes the installation process easier and enhances the installation flexibility. These cables can also be used in case of electrical interference as they are fully immune to these processes.

Singlemode: SMF cables or the single mode fiber optic cables are a high speed and distance media communication. It makes use of a single or maybe sometimes dual strands made of glass fiber responsible for carrying the signal. Laser is the light source generally used with these kinds of cables although, LEDs (Light emitting diodes) are also used sometimes in this case. With the use of these cables, a mono source of light may be transmitted from one end to other and is pulsed for the purpose of creating communication. These cables are also used in long runs because these cables also have the advantage to transmit the data at a larger distance that the multimode fiber cables and also at a faster rate than it. It is also fully immune to the process of electrical interference as light is the medium used instead of the signals. 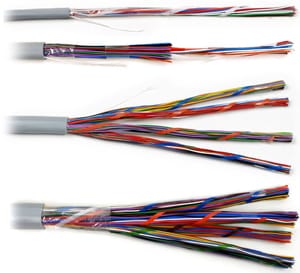 Fiber optic cables may be becoming more and more prominent these days, but the copper cables are the most widely accepted and most used for network purposes these days. There are a lot of different forms of these copper cables and quite a lot of technology has been used in their evolution.

UTP: Then unshielded twisted pair or the UTP cables are the most common cables that are in use these days. This is because of their easy to install features than STP. Most widely used areas for these cables are in distribution and access areas for the network. The wire pair inside the cable are also twisted which provides protection from the process of electrical interference.

STP: The shielded twisted pair or the STP cables is much like a UTP cable but it has an extra foil shield which is done to cover the wires for adding another protection layer as a response to magnetic interference from outside. The connections are required to be subtly grounded for the protection to be effective and useful. For such reasons, the whole process of installation becomes a little bit more complex and due to this, many organizations chose to deal with the fiber optic cables instead of these STP cables where there is another problem of electromagnetic interference.

CAT 3: A total of 8 wires making up a combination of 4 pairs set up a cat 3 cables. It also includes 3 twists for each foot. These type of cables can handle transmission up to a frequency of 16 MHz and was very popular in the decade of 1980s or so for giving up a speed of 10 Mbps Ethernet but nowadays, the use of such cables is limited in only telecommunication sector and equipments.

CAT 5e: A total of 8 wires making up a combination of 4 pairs set up a cat 5 cables. E here in this category stands for the advanced version of the CAT 5 cables. These category cables are also used for a transmission of frequency up to 500 MHz but are also much more capable for handling the disturbances for each pair which occurs because of the transmission on all the 4 pairs at the same time and due to this, it finds extensive use in Gigabit Ethernet.

CAT 6: A total of 8 wires making up a combination of 4 pairs set up a cat 6 cables. These category cables are used for a transmission of frequency up to 250 MHz and also are standard back which was declared in 2002. These are mainly used as riser cables which are used in connecting floors together.

CAT 6a: The A in here stands for the augmented version of the original CAT 6 cables. This category cable is used for a transmission of frequency up to 500 MHz and has characteristics like improved crosstalk etc. These category cables are certainly the future cables and also conform to TIA/EIA specification.

Coaxial: These cables make use of an inner wire core and outer braid using an insulating wire. The inner wire core has the responsibility of carrying the entire signal. This type of cable used to be the backbone of networks connecting the computer and the bus topology in the era of late 1980s.

Crossover: The devices which are similar to each other and need to be connected together are done by the use of crossover cables rather than the straight cables. The straight cables are used to connect two different network devices but in case you use it to connect similar devices, they would still work and it would auto sense this mistake and switch pins for you itself.

T1 Crossover: A channel or data service unit is termed as digital device interface which is used for connecting router with digital circuit like a T3 or T1 line. Connection of single CSU/DSU with another is done by making use of special pinned cable known as the T1 crossover cable. 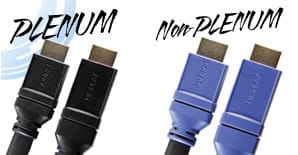 The difference between the plenum cable and the non plenum cable lies in the construction process of these cables and the requirement of the place where it will be used. The area between floors is called plenum and is the perfect setting for running cable to connect various computers together in a building. Circulation of air is the prerequisite for the plenum cables between the storey and the floor of the building. Plenum has disadvantages in case of fire because the insulation of these cables can generate poisonous smoke and can actually help fire spread it. So, these cables have to be tested for these hazards before using them. Non plenum cables are generally less expensive but not quietly used for obvious reasons.

With evolvement of networking, the cable types and properties have varied considerably. From copper wires to glass fibers, each category has its own specific properties and can be selected according to the requirement.

Singlemode fiber to Ethernet: Single mode fibers are most used in buildings or a campus, this media converter is used in form of fiber data based signal and when light strikes the building, it carries the signal forward throughout the building in form of electricity. That is where this single mode to Ethernet converter media finds its extensive use.

Multimode fiber to Ethernet: In many of the organizations, the multimode fiber is the backbone of building. This allows it to carry large amount of data than in case of copper cable. Even with this incentive, it looks unlikely that this will be the way for all computers. This converter is mainly used as backbone segment and patch panel leading to wall jacks and then to the computer.

Fiber to Coaxial: Coaxial cables used to be the backbone of some buildings earlier although, this is not seen nowadays. They are now only used for connecting cable modems for telecommunication or internet communication purposes. For a high bandwidth communication through a provider and then distribution among the networks, the whole process is done by making use of a fiber to coaxial converter media. 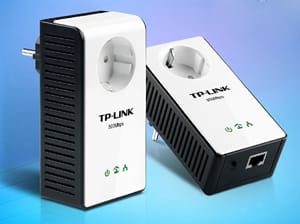 BPL or broadband over power line is a process which carries data based through conductor wire which also finds its use in transmission of electrical power. In the recent years, power lines were considered a great option for communications related to high bandwidths, but now with the advancement in technology and high bandwidth possibility, BPL converters are extensively used for such purposes in various SOHO and enterprise network. The BPL converter facilitates the communication above power lines when there is difficulty in installing other type of lines for communication.

In the end, you must carefully examine the needs and the requirements of the network. You also need to carefully examine the communication cable which one to go for. The more is the category number of the cable, the faster the data can be transmitted through the same without leading to a loss of signal. Also, be prepared to understand the uses of all the types of cables and differences between plenum and a non plenum cable and know which one to go beforehand. Also a requirement for the network is the knowledge and familiarity about the different types of converters and which one would yield you a high output. So, go ahead and get yourself the best network connection.