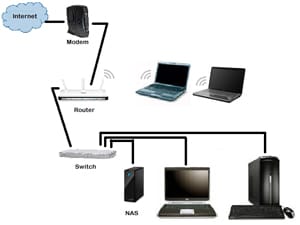 SOHO network or also termed as single or small office/home office network is mainly referred to a business category involving a small number of workers usually from 1 to 10. It is a type of local area or LAN network connection meant to be used in small businesses. Like many other LANS, SOHO network may also be a mixture of networks of wireless or wired computers. The SOHO router is more or less the conventional broadband router designed to be operated in such organizations. A SOHO network may also support a bit larger group of peoples and is generally a privately owned or owned by self employed individuals for a smaller business organization. SOHO, nowadays, is becoming more and more popular in different sectors including networking circles. As there is increase in the number of smaller business units, the call for SOHO networks is also in demand and is on the rise day by day. The features and benefits provided by SOHO such as easy to use and setup network etc. makes them an ideal choice for the same. Virtual office is another synonym sometimes used for a SOHO network. SOHO networking is mainly used for the purpose of connecting several computing devices on a single network to share the information effectively with the connected multiple users in the organization.

Router tops the list of the most basic and important requirements for a SOHO network access. They are also the best choice to be used in small offices because of their ability of identifying IP address through each of the computing devices. Some of the good routers will also include an inbuilt option of a firewall system which also helps in preventing malicious attacks which generally comes from the files or data coming from the web.

All the computing devices on the SOHO network will also require a network card along with a network adapter or a network cable. This will be helping you in the process of file sharing when single computer on network known as server will be accessing the network and sharing the files with the shared computer on that network.

Modem is also an essential need for this network as it will be mainly responsible for receiving and communicating the signal from the service provider of the internet. Every SOHO communication makes use of a large number of apparatus to ensure that the signal is free flowing and the information is transmitted without any loss in the system.

Network cable is also required for this purpose. The network cable will serve as a medium and set up the link between the modem and the router. Ensure to connect the cable in the appropriate port of each side. Now, begin with SOHO by connecting the computer to the routers and the modem with internet cable.

Cable is the most basic element required for the SOHO network to work in the way it should. You will be requiring at least one cable for each of the computers that you will be connecting with the computer. 10 base T and 100 base T are major two types of cables that are used for this purpose and the maximum range allowed for the length of these two cables is 100 meters or alternatively around 328 feet. Always keep in mind not to keep the cable length to short or it may lead you into trouble although, there is no set prescription for a minimum cable length. Three feet or long cable is the least you need for a good network connection and make sure the quality of cables is also better. Don't settle for a cable quality under category 5 which is often termed as Cat 5. Ensure to take this point in every networking cable and may take the cable above the category 5 but below it is a strict no. Copper clad aluminium wire which is ideally used for carrying audio, video or data is advised for this purpose. Solid core and PVC jacket cable will solve your cable issues. Although, there is also a provision if you can make your own cables but it is not highly recommended of creating one. Local computer and general store can easily provide you with the good quality cables and buying them is not that much of a trouble for a small office or a home network. The extra incentive in buying from the store is that if in turn it turns out to be an improper or a bad cable, you can always bring it back and get a new and better quality cable in exchange of it. Also, it will help you with better signal to noise ratios and minimum losses which in turn will help you for a faster and more reliable network connection which is an important issue for any small or home network connections.

There are many other types of requirements which are a necessity for creating a SOHO network. Few of them can be listed as:

Hardware requirements: These consist of an Ethernet adapter for every computer that you will be connecting on the network. While buying any new equipment, use 100 base T equipments. If you already possess 10 base T adapter cards, buy dual speed 10/100 hub which will help you in maintaining backward compatibility along with the previous equipment and forward compatibility with newer equipment.

Ethernet Hub: The working of a brand is good as the range over which the hub goes. Get the one which has more ports than the number of devices you wish to add to the network. The other thing to be kept in mind while buying is if the hub is 10 base T or 100 base T or both. If you are planning to use older equipment, then it is advised to go for a dual speed hub and if not, then get yourself a 100 base T hub.

Wireless Network Interface Card (NIC): For each of the computer you wish to add to the network, you will need a wireless network interface card. It is an Ethernet card which also has a built in antenna which helps in communication of the device with the access point.

Wireless Access Point: This will act as central receiver for the device. This wireless access point will be connected to the wired switch or network router.

The SOHO network should be carefully planned keeping the environmental limitations and considerations in mind. There is a range of environmental considerations to be kept in mind before designing a SOHO network especially if you are looking to design a wired network. Make sure that the routers or any network switches are in a proper area which is confined from flooding dangers and the high humidity factors or not cold enough so that a proper operating temperature is maintained. In case of a wireless network, structure and design of the building should be taken into account and things responsible for reflection or absorption of the radio waves must be taken care of. You won't need any expensive designing but it will be mandatory that you can see the data yourself and nobody else can. There are also a set of unique and different set of requirements required for a SOHO network. The infrastructure challenge is a big one which can be different from many of the corporate offices Plan a proper outlay of supporting the different devices for longevity. Also, equipments will require a moderately cooler temperature so that they do not get heated up quickly and can function properly for longer use. A ventilated area will serve the purpose. An Uninterrupted Power Supply (UPS) is also a necessity for setting up the SOHO networks in case of any power failure or power outage so the servers can continue to work normally. Be aware of the wireless network around the building to avoid conflicts between them and make a proper control over it. Don't mix or set up the network at the same frequency as the person next door is using to avoid conflicts.

Most of the devices purchased and used in a SOHO network are basically a scale down version of the exact equipment that is used for the enterprise network. For instance, a router can also add security configuration and specific static routes, but it most probably be in graphical user interface system so that one can easily understand the process without any training requirement. There will also not be available the redundancy and flexibility that you will be getting in an enterprise networking system. Thus, this should probably not be suitable for use in larger networks. SOHO equipment should only be used in a SOHO environment and not meant to be used at larger networks. You need to know that the equipments are less capable and are a smaller version of the big ones. Network, power and environmental conditions are all different for these types of equipments. Also, this will be costing you some lesser bucks because of the lesser features and can help in financial trade off. The device is designed to meet the needs of fewer people, so it will have lesser speed and also contains redundancy limitations. These also do not have a lot of management options available to them, there are not a lot of command line and not a lot of diagnostics that you can perform in an enterprise network. There are also not a lot of options available for upgradability, this means that it will be limited by the amount of internet bandwidth that will be coming to your home or the building.

The most important process for setting up a SOHO network is to know about the compatibility requirements. The hardware requirements, software requirements, adapter cards etc. and all the basic equipments required have to work in collaboration to build up a good working SOHO network. This will make it easier to troubleshoot and make up for a stronger network. Every site for the SOHO network will be configured identically to make the network as a standardized unit. Make sure the network pieces can all talk between them properly even if it is a wired connection or a wireless one. The wireless access points may not function or communicate the same way all the other wireless technologies does. So, the enterprise will be providing that standard set of SOHO for both the wired and wireless infrastructure. TCP/IP protocol is generally used these days to communicate the wireless technologies and in a SOHO configuration setting, the TCP/IP may also be standardized from site to site. An interesting compatibility requirement between the various operating systems like Windows, MAC OS or LINUX etc. need to be made sure that they are built in a SOHO. Backup requirements in a SOHO may also be a little bit different.

SOHO businesses are exaggerating with the advancement in technology which allows the workers from home to attach to internet whenever and wherever they want. With the services and goods being made especially for these smaller networks, the SOHO network and its demand is on the rise and you just need to make sure of the whole system working together. Get ready to even open you small office at maybe from your home with these little yet big SOHO networks.