Routing and Switching: Properties and Purposes

Whenever data is communicated and transferred over a network, it has to be made sure that the data chooses the most appropriate and feasible path. There are a number of things which need to be considered in this case. For example the length of each path, the duration which the data packet will take travelling on the path, the avoidance of any congestion on the network etc. All of these problems are catered through the process of Routing and Switching. There are many modern and traditional techniques which are used to carry out the task of Routing and Switching. These processes make sure that the network runs smoothly and does not have to deal with any problem or hindrance.

EIGRP is the abbreviation of Enhanced Interior Gateway Routing Protocol. EIGRP is a Cisco propriety protocol which has been made to operate on Cisco routers and switches. It can work on small, medium and large level networks as well with efficiency. In its metric calculation, EIGRP makes use of bandwidth and delay. However, it can also use load, reliability and maximum transmission unit (MTU) for this purpose. The technicality of EIGRP allows it to be termed as and advanced distance-vector routing protocol as well as a hybrid routing protocol. EIGRP ensures the smooth flow of the network by gathering information from its surroundings and providing the perfect route for transmission. Moreover, EIGRP also carries out the task of storing all the information regarding the topologies of all the networks. However, the only limitation faced by EIGRP is that it only works with routers and switches which have been made by Cisco.

OSPF is the abbreviation of Open Shortest Path First. The basic purpose performed by OSPF is to find the shortest path to a destination on a network to make sure that the element of cost in the process in minimum. OSPF is basically a link-state routing protocol which is most commonly used nowadays. It also comes under the category of "open" protocols. It uses a very intelligent way to carry out its purpose. It gathers the information from all the routers in the surrounding areas to make sure that data chooses the smallest path to be transmitted from one place to the other. It can effectively manage the bandwidth of the network and can easily operate on complex networks.

RIP is known as Routing Information Protocol. There are basically two versions of this protocol, RIP v1 and RIP v2, although the RIP version 2 is the one which is used today. It is a distance-vector routing protocol in general. In order to make sure that the traffic on the network is minimal, the multicast method is used for the transmission of messages. Hence, this enables the network bandwidth to be used effectively as well. This routing protocol can also support complex networks to make sure that they run smoothly. However, RIP makes use of a Hop count metric, with a maximum of 15 hops. This is the reason why it is not suitable enough to be used in the modern networks which come with varied speeds which it cannot cater to. 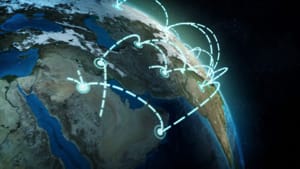 Hybrid Protocols are those ones which make use of two different protocols to decide the route of transmission. In this regard, a Hybrid routing protocol uses both Distance-Vector Protocol and Link-State protocol to make the routing decision. In fact, Hybrid routing protocols are the most common nowadays. The most renowned Hybrid Protocol is EIGRP, Enhanced Interior Gateway Routing Protocol.


Static Routing requires the user to manually update the routing table. This means that if there is any change in the topology of the network, it will have to be entered manually in the routing table. However, this process is susceptible to human errors while entering or calculating the data. Still, sometimes it is useful to make use of the process of Static Routing, for example when you are looking forward to enhancing the security of the network.

Routing Metric basically refers to the data which is used by a routing protocol to make decisions regarding the route of data. In this case, better Routing Networks allow the protocols to make more informed and intelligent decisions which also prove to be quiet beneficial for the networks. There are generally four different kinds of Routing metric.

Hop Counts: A Hop is referred to as a process in which data passes through two routers and enters into another network. This means that each time data enters into a new network, a hop count will be registered. Hop counts are basically used by RIP and RIPv2 protocols. This transition from one network to another is usually referred to as a Node. However, do keep in mind that a particular network will be out of reach if the hop count goes to infinity.

MTU, Bandwidth: MTU is known as the Maximum Transmission Unit. It shows the largest single packet of data which has successfully been transferred through the network. However, it does not play a significant role in the calculation of the shortest route for the data. It is generally used by EIGRP but has become quite obsolete now.

Costs: Costs basically signify that how many links are passing through a particular route at one time. The calculation of costs in done to find out the route having the minimal number of links, and hence the least amount of traffic. The data is then directed on the route involving the least number of costs.

Latency: Latency is the exact time which a data packet uses to move from one point to another. Latency is calculated to figure out that which route takes the minimum amount of time for the data to travel. Hence, the data is then directed on the route with the minimal latency. 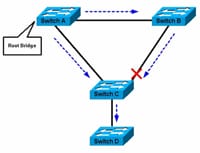 The existence of physical loops in a network could cause a lot of problems such as the corruption of the MAC Address table and broadcast storms. In order to avoid such problems, Spanning Tree Protocol (STM) looks for all the redundant links on the network. Furthermore, it disconnects all of these redundant links to make sure that switching loops are not developed which will lead to problems stated above. It makes use of a Spanning Tree Algorithm (STA) to maintain all this information and then acts accordingly. Spanning Tree Protocol usually works with network switches and bridges.

VLANs provide a lot of features and benefits to a network. Primarily, VLANs are used for the segmentation of a network to make sure that the performance of the network becomes much better and its security also increases. VLANs provide you the privilege of creating a number of broadcast domains on a single switch. This means that VLANs hold the quality to produce a separate network for each of them. The biggest advantage of a VLAN is that all the data traffic that is communicated in the interfaces of a VLAN remains within the network which deals with the aspect of security and increases it.

Port Mirroring is a process which enables you to monitor and determine the effectiveness of a switch. It is usually carried out by directing the copy of all the traffic towards a single port. Then this traffic is analyzed by a protocol analyzer to figure out the performance of each switch. This process is quite crucial to make sure that each switch is performing perfectly. It is a smooth process and it does not interfere with the original traffic in any way.

Collision Domain is the domain which is congested when different nods on the network try to communicate at the same time. In order to prevent this issue, Hubs or switches create a collision zone which prevents this congestion caused by the nods in the collision domain. It is quite essential to make sure that the network runs smoothly without any problem.

Routing protocols can be separated in two different categories depending on the task they perform. Before knowing about these protocols, one should know the meaning of an Autonomous System (AS). An Autonomous System is the one which is under the control of a single administrator. Following are the two categories of protocols.

EGP: EGP is the abbreviation of Exterior Gateway Protocols. These are the protocols which will be used for the purpose of communication between different Autonomous Systems. This means that all of the protocols which will be used to perform various purposes between Autonomous Systems will be categorized among the Exterior Gateway Protocols.

Whenever there is a change in the network, the routing table is updated. This updating is necessary no matter how much minimal the change might be. Furthermore, this change will be communicated to every router which resides on the network. Convergence is referred to as the total time taken for the routing table on each system to be updated. Smaller the convergence of the system, the better and more efficient will be the performance of the network.

All of this information makes it quite clear that how the process of Routing and Switching takes place and what are the purposes which are achieved by doing this. Different types of protocols come into existence when we talk about these processes and each of them has a different purpose. We also realized that there are a number of ways to achieve a particular task, but considering the delicacy and complexity of the issues we have to choose the most appropriate process which provides the best output.