The LAN technology will assist the devices on the network communicate with each other. These LAN technology is the special combinations of software and hardware which makes the network perform at a specific speed and in the certain way. It may serve 2 or 3 users to as many thousands of users. Here twisted pair, coaxial and fiber optic cable are the most common form of network media used to transfer data. Here BASE denotes the baseband and F means Fiber. 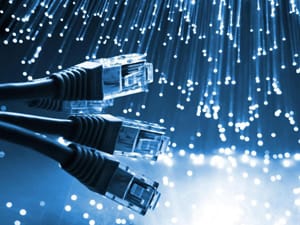 Ethernet is one of the most widely used technology in the LAN. It also strikes a good balance between price, speed, supportability and easy of installation. Approximately 80 % of most of the LAN connections use Ethernet today. An Ethernet networks run the data at the rate of 10 million bits per second. It uses the carrier sense multiple access with the collision detection protocols to control network access. When the network transmits data, each an every LAN network device will receive it. The many different types of Ethernet are cabling, speeds, equipment and connectors. Most of the modern Ethernet will only use fiber or twisted pair.

In that, the baseband is the cable which only carries maximum one signal in one way at 1 time. In all the modern Ethernet cables, 1 line is assigned for receiving signals and the other line is for sending the signals. It results in collisions. Broadband media are the type which will carry many data signals on the same wire with the help of some multiplexing type. The system which communicate through an Ethernet divides the stream of data as a small piece is known as frames. There are 4 types of frames available in the Ethernet and each type is used for different purposes.

It is one among the several adaptations of standard Ethernet for the local LAN's. This 10BaseT is also known as twisted pair Ethernet because it uses the twisted pair cable and carries 10 Mbps throughout the distance of 100 m maximum length. This cable more flexible and thinner when compared to the coaxial cable used in the 10Base5 or 10Base2 standard.

It functions at a rate of 100mbps speed. It is also known as fast Ethernet. This implies that the designation refers to both the fiber and copper based Ethernet versions. It meets the growing industry standard with its high speed. It is supported by most of the vendors such as Adaptec, Hewlett, Cisco, IBM, Bay Networks, 3Com, Adaptec and mostly endorsed by IEEE802.3u standards. This network uses the star topology provides data frame compatibility with the IEEE as well as Ethernet. It supports all network design topologies and rules of 10BaseT Ethernet networks. It allows the organization to use the existing category 5 cables and network infrastructure while upgrading to the higher level transmission speeds. Like Ethernet, 100Base T is based on the CSMA/CD LAN access method.

It is a cheaper version of the Gigabit Ethernet, which is used in the IEEE802.3ab standard. This 802.3ab is especially designed to use CAT 6, 5e or 5 types. It allows businesses to make use of the Gigabit Ethernet on its current installations. It has the capacity to reach up to 100 meters on the CAT5 cable, however CAT5e is always recommended for the twisted pair type gigabit Ethernet and its implementations. Here 1 Gigabit is equal to 1000 megabits per second. It uses 4 pairs of category 5 unshielded twisted pair to accomplish the Gigabit data rate.

The 100Base TX supports the transmission at the rate of 100Mbps through 2 wire cabling. It mostly uses 1 pair of wire for transmitting the data and another pair for receiving the data. Generally, 2 pairs of wires will be bundled as a single cable with an additional pair of wires. This 100Base TX is not designed to tolerate the crosstalk which will occur when the cable is shared with the other signals. It is a predominant form of the fast Ethernet since, it belongs to category 5 cable which comprises of 4 pairs, it can also support 2 100Base TX links with the help of wiring adaptor.

This version of the fast internet is proposed and to be used for fiber optic cable. It was introduced while 100BaseTX at the same time 100BaseFX introduced. Part of the IEEE 802.3y standard can be used either in full duplex mode or in half duplex mode. It produces 100 Mbps in all the usage modes. This 100 Base FX uses 100Base -X PHY with the FX PMD to support the 100 Mbps transmission rate through 2 fiber optical cable.

The first 1 Gigabit or 1000 megabit Ethernet standard has to be released which is also called Gigabit Ethernet. This is proposed for the use with fiber optical cables. There is a large base installed category 5 unshielded balanced twisted pair wiring and also the engineers designing this Gigabit Ethernet believed that it was an important thing to create an implementation which could run across the 100m lengths of category 5 high quality cabling terminated by the RJ -45 connectors.

The 10GBase-SR is the short range. In the endless quest for the faster data transmission rate, network standard is pushed to the next levels. The 10 Gigabit Ethernet is also known as 10GbE. It has the capacity to offer data transmission up to 10 Gigabits/second rate. Which is 100 times or 10,000Mbps faster when compared to the modern LAN implementations. Most of the hardware, networking manufactures or markets 10GbE equipments. The 10 Gigabit IEEE 802.3ae Ethernet specification like serial interface which is designed for transmission on the Multimode fiber. The 10Gbase SR is proposed for MAN or LAN implementation with the maximum 300 meters distance with the help of 50 microns multicode fiber cable. It can also implement with multicode fiber cabling of 62.5microns but it is limited to the 33 meters. This type is designed for the use over the dark fiber.

It is a port type uses 1550nm lasers and for the single mode fiber. It has a reach of nearly 40 kilometers through an engineered links as well as 30 km over the standard links. Its physicality coding is defined in IEEE 802.3 clause 49 and physical medium dependent in clause 52. It provides serialized data at 10.3125 Gbits per second line rate. This transmitter is implemented with EML- externally modulated laser. It is the mode of 10Base E is supporting which has link length up to 40km on the single mode fiber and it is designed for the use over dark fiber.

It is defined for the use with a WAN PHY. This will drive the maximum link distances nearly up to 80km depends on the fiber standard employed. This adds the WAN interface sublayer (WIS) . It is used to generate the Ethernet data streams which may be mapped directly to the SONET/SDH streams at physical level without any need of higher level processing or MAC.

It is the largest base which uses WAN PHY like 10BaseSW. The 10Base-LW is not compatible with the SDH or SONET interface since it didn't conform to the electrical, logical and optical requirements which is specified by the SDH or SONET. It supports 10Base supporting L with the link length of 10 kilometers on a single standard mode fiber. This type is designed to connect the SONET equipments.

The 10Base EW is the model of 10Base-E supporting the link length up to 40 kilometers on the single mode fiber with the help of optical wavelength 1550nm. This media type is required to connect the SONET equipment.

It works on a standard of IEEE 802.3. It runs over 4 wires which consist of 2 twisted pairs in the category 5 or category 3 cable. An active switch or hub takes the middle and have a port on each of the nodes. This configuration is also used for the Gigabit Ethernet and 100Base T. it uses unshielded twisted pair type wiring or STP cables.

It is most commonly used in the wired environments. Ethernet is the one which transfer data on the network through CSMA/CD- carrier sense multiple access along with collision detection. It detects the activity on the wire and reacts for collisions.

It is especially geared towards the wireless environments. CSMA indicates that the computers wait until the ether is free. At that time, no electrical signal denotes when an ether is free. Here the signal is the only carrier of the ether and also act of waiting for the opportunity to send on an ether is the carrier sense.

The computer sends data through the network by moving the data frame to all the computers which directly connects with the local network. Ethernet is one of the broadcast based network technologies. It is the one which send data throughout the entire local network. This broadband carries multiple signals on a single line. It is designed for every device on the subnet.

The 2 different types of data frames from 2 different computers will interfere with each other due to they released the network at the same time. Since most of the networks are not an instant, it is always possible for 2 stations to find the ether, deem it essential time to send and also both the send will take place at the same time. When this collision occurs, then the sender has to stop the transmission immediately and has to wait for some random length of time, and starts transmission again.

Bonding works like a disk striping in the RAID setup and offers redundancy for the network connections. Bonding will use 2 or more channels, NIC's or connections to allow the data via instead of simply one. Bonding combines physical links to create a faster logical link aggregation of IEEE 802.3ad.

Distance is the one how far away the data can travel to receive from one point on the network to the other. When it comes to the media, this distance is referred as how far the data has to travel before that requires to be rebuilt by a switch.

As an organization grows their support bandwidth and networks, intensive applications and traffic types, this 10GbE technology is now becoming more pervasive. Its functionality can offer immediate performance safeguard and benefits a company investment into the future. There are so many manifestations of the 10GbE and gigabit standards to suit the various networking environments, for that there are many fiber and copper cabling technologies to assist them. With this technology, it is possible to develop a sound migration as well as cabling strategy which enables to grasp the benefits of 10GbE for years to come.

By maintaining interoperability with ubiquitous, vast and base of Ethernet networks, then the 10GbE provides a direct migration way to the higher performance level at potentially lower cost.