How to troubleshoot common Routers and Switches issues 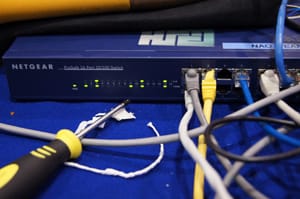 A router is a device generally used for networking which is used for forwarding the data packets flanked by various computer networks thus creating an overlay inter connected network because a single router is linked with various data lines on different networks. In case of a data packet coming in line to another data packet, the router requires reading of address information to find the final destination. Then it combines with the information already stored in a router policy to direct the source on to the subsequent network on its path. In this way, data packet gets transmitted from router through networks creating an inter network to reach the destination point. The selection for the best path inside a network is termed as routing.

The switching loop, also known as the bridge loop, occurs during networking in computers when there is in excess of one OSI model Layer 2 pathway between any two endpoints, say when there are connected several connections between any two ports or network switches connected via common switch with each other. Switching loops Layer 2 along with broadcast storms can be overcome by making use of function known as Spanning Tree Protocol or STP in LAN (Local Area Network). The Spanning Tree Protocol will allow the redundant links inside the network to avoid the failure of complete network system even in case of failing of an active link. Through this technique, almost complete switching loop issue can be overcome. The STP is supported through a simple algorithm which is developed at DEC by Radia Perlman. The STP was characterized by IEEE through IEEE 802.1D. The only problem now remaining is the sluggish convergence time of the STP and to overcome the problem, another version of STP known as IEEE 802.1W was introduced which is also termed as RSTP (Rapid Spanning Tree Protocol) because of its ability of a large convergence time. Apart from STPs, the other things that one can also do to avoid the problem of switching loop is to monitor the CPU load through SNMP or enabling the SNMP traps for some of the events like topology STP changes etc. Enable the use of storm controls to limit the broadcast at the ports or maybe enabling port security along with limiting number of address MAC with every port can also help solve the problem to some extent. In case you run a DHCP, enable Option 82 for avoiding the problem. Always check to not span the VLANs in excess in using the L2 topology to overcome this issue.

Correct cabling is extremely important for maintaining proper orientation of bypass copper switches, especially for 10/100 BaseT applications. The improper cable issue can lead to inability of unit to maintain the functioning like bypass switch. To overcome such cable issues, it is very important to make sure that both the router and switch interface can communicate with each other in a bypass mode. If this test of Bypass communication mode does not succeed, try directly connecting the external two cables with the help of RJ45 female coupler. Another way to make some further inroads to avoid the problem is to connect only a single cable at a time. Cabling should be done in a way such as the router is directly connected through cables with a DTE based interface. This direct cabling must also be there to connect switch port with a DCE interface or network switch. Crossover cables must only be used at places where connection with opposite type equipment is required.

Port configuration is among the most common mistakes that administrators tend to make while processing the networking request. It is mostly during the configuration stage that either on router or switch or the addressing of local subnet that these issues generally occur. If the problem is related to the switch port configuration, using show interface switch port command must be done to check out what is the root cause of the problem. The show interface switch port and the show running config are some of the powerful tools for troubleshooting the port configuration issues. If you are using a traditional model for routing, make sure that switch ports are connected to router interface and are configured correctly. If the same has not been done correctly, network devices will not be receiving or getting connected to the router interface which will hinder traffic to other networks.

For overcoming this problem, utilize switch port access 20 VLAN configuration interface command through a switch port. Whenever a switch port is made to configure or assign with a correct VLAN network, computer is then able to communicate through router interface and then will be able to access other VLANs in connection with the router. To configure a static VLAN, it must be assigned statistically. For restricting VLAN routing, you may also go to Configuration > Network > IP > IP interface section. Then click Edit to restrict the routing for a particular VLAN. Configure the VLAN for obtaining the IP address and then uncheck inter VLAN routing option and apply the changes to complete the process.

MTU path discovery is a standard technique in networking terms which is used to determine maximum units of transmission through a network between two IP hosts required to avoid IP fragmentation. But this also causes problems like security devices blocking all the ICMP messages for security benefits which also includes the error which are required for genuine operation of MTU path discovery creating a black hole. To avoid this situation enabling detection for black PMTU hole on the hosts for windows is required that will communicate with the WAN connection. To do this, open registry editor and search for the following key in the editor 'HKEY_LOCAL_MACHINE\SYSTEM\CurrentControlSet\Services\tcpip\parameters' and then select add value from the edit menu, following on then add value name = Enable PMTUBH Detect, data type = Reg_Dword and value =1 and then quit the editor and restart your device. Another method for the same is configuring the router intermediate to enable sending of Type 3 ICMP 4 Code messages which requires a firmware upgrade or router software, reconfiguration or replacement of router.

Sudden and power interruptions might result into having sporadic connection and even running out of all when the power outage is restored. If something of this sort happens, you will need to follow a standard set of instructions to get back on track. Firstly, switch off the router and also unplug the router from the external power adapter. Wait till 10 seconds before connecting the adapter and switching it ON. If you are still facing the same problem of no connection, then try doing the following. Resetting the router and then configuring it - this may be achieved by pressing and holding Reset click for at least 10 seconds. Then upgrade or re - flash the router's firmware by using the latest version of it and then trying re - flashing it.

Troubleshooting the problems related to network and routing or missing information from routing is an essential skill involving implementation and maintaining a routed network which makes use of a routing protocol. There are several reasons for such problems which can be listed as follows:

This problem may arise due to the modules not getting recognized by the server. In order to overcome this, you need to verify information on hardware of the network and will need to use show diag prompt in EXEC mode. If the information is not present in the module, reset hardware module. Router will need to be reloaded after installing the module. Check for documentation on hardware installation as some modules also need configuration from router after installation. If an error message is displayed, it is the hardware incompatible issue. Check modules to make sure that they are in support with router.

Subnet mask is required for TCP/IP to function properly. It determines if the host is on using a local subnet or any remote network. The troubleshooting for such problems is done through the use of WINIPCFG, PING and IPCONFIG utilities. The common problem you'll encounter is that computer will be able to communicate with hosts on local network and to all remote networks but not to those who have same class and are nearby to it. To fix such issues, you will just be required to punch the subnet mask correctly in the IP/TCP configuration for the host.

Any device encountering the problem of wrong or incorrect gateway can communicate with any host available on its own network segment but not with some or all hosts available on the remote network. A network using more than one router and if wrong router is set the default gateway, the host can communicate only with some remote networks. The problem can be solved by setting up a DLINK to work as a switch or put the same in bridge mode that can provide the link for communication between networks.

Wrong DNS error message is something we all wish hasn't existed because it can almost kill your network. DNS looks after the process for converting the website's URL to IP address required for actual communication. However, there are some easier ways to overcome the problem. Verifying your network connectivity is the most basic step you need to try in this situation. Then check if the server is doing load balancing across servers? Also, don't forget to check the server's forwarders. Then, try to ping some hosts and perform troubleshooting through NSLookup. Finally, alternate server DNS can also be tried and make sure the device is virus - free by performing a quick scan and then reboot the DNS server to complete the process.

The routing is required for many of the common operation such as electronic data or telephone network and transporting network etc. The router in general is connected mainly with two networks, it may be two LANs or one LAN and one WAN and its related ISP network. Any error or issues within this network or connection makes way for many different types of problems encountered while using routers. Above are mentioned some of the methods to deal with several problems related to routers and switches. Hope, they are useful.