How to analyze traffic with network monitoring resource 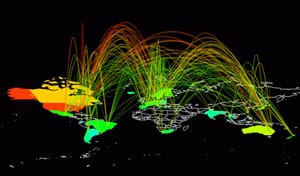 As the company intranet grows, it is essential that the network administrator is aware of it and have to handle the different types of traffic traversing their networks. Traffic monitoring and analysis is necessary in order to more sufficiently troubleshoot and resolve the issues when it occur. There are a variety of tools necessary to help the system administrators with analyzing the network traffic. The below content will provide sufficient knowledge on the network monitoring tools. These tools will assist to stay top on the network in future.

The SNMP is referred as simple network management protocol. This protocol is used by the network administrators over more than twenty years to receive details about the network devices. When they start using this SNMP, sure they can able to getting big picture there from the network. The network components in the SNMP such as switches, routers and computers will be installed with a software agent which makes them to report necessary information back to the installed central server MIB- management information base software. The MIB and agent reports to the same community. It is possible to configure an agent to collect and report the particular information such as RAM processors, hard drive space, devices, software installation and much more to MIB which shares the similar community names with the agent. This method of reporting of an agent is considered to the trap. The command which is used are generally collect request as well as set requests.

It is the application layer protocol which is one among the part of a TCP/IP protocol suite. This allows you to manage the network performance, identify and resolve the network issues and also plan for the network growth. It collects traffic statistics via passive sensor which are implemented from the router to an end host. When 2 versions exist and provides enhancements, including additional protocol operations. There are three key components to the SNMP such as agents, network management systems and managed devices. The first version of this SNMP will give some problem to the network and the earlier versions of the SNMP was that any information which was gathered for a network administrator can also read by the attacker. The later SNMP version will employ security measures like integrity algorithms and encryption methods. This SNMP uses 4 protocol operations in order to operate the trap, set, get next and get. Each of those commands has specific uses. The agents in the SNMP contain software which has knowledge of the management information and also translates the information into the compatible form with the SNMP. The memory resources and processing resources which are needed for the network management provided by the NMS. The SNMP will act as an agent or NMS can perform both duties as well.

The SNMPv2 improves and revise the original version of SNMP. It also includes enhancements in security, confidentiality and performance of data of the network. Still, it remains compatible backward with the SNMP original versions. It is the safe and secure version when compared with the SNMP earlier version.

The major changes in the SNMPv2 are such as

The SNMPv2 system architecture comprises of 7 messages instead of 5 get bulk request and information request. The manager to manager communication to perform NMS interoperable. This version is defined in RFC1902 model divided into 3 parts such as object definitions, module definitions and notification definition.

Due to lack of security with SNMP, the network administrators were using telnet for fault management, configuration and accounting. This SNMPv3 addresses all the related issues to large scale deployment of SNMP fault management and accounting. At present, this SNMP is predominately used for performance management and monitoring. The version 3 is considered as the secure version of SNMP which also facilitate remote configuration of SNMP entries.

The version 3 of secure network management protocol was developed in the year 1997 to face more security problems. It uses the secure authentication mechanism as well as encrypts the data packets in the transit. It employs an algorithm on message integrity to confirm that the details which is sent to a network administrator is perfectly accurate and have not been changed in a transit. This will be the best bet for the conscious network security. Through this, you can get the details what you need to learn, network better and at the same it prevents the attacker from attaining information.

The primary goals of the SNMPv3 are:

It is the beginning to learn about new network of what happened in the past as well as set in the place method of recording information for future. Using the syslog is the standard for logging with the help of Unix or Linux. It allows to gather information over the operation of a variety of different application packages and devices. It helps to accomplish the baseline of the normal traffic and also compare baseline at the later date while unusual things happening like misconfiguration and attack. For other than Unix or Linux, there are many options available for that.

The syslog is the standard for the computer message logging. It allows separation of the software which generates message from a system that saves them and also the software it reports. It can be used for the computer system management, security auditing and generalized information, debugging messages and analysis. This is supported by a variety of receivers over multiple platforms and devices. Due to this, it will be used to integrate the data log from different types of systems as a central repository. The messages are labeled with the facility code indicates the type of software which are assigned the severity and generated messages.

The most important things that the network devices and computer are good at tracking exactly what it is doing and what it already done. By configuring properly, most of the devices will provide the wealth of information what change has been made to configure and how it has been used, who made the changes, when those changes made. You create system logs such as switches and routers.

Most of the system logs are used by the servers to analyze what services are there for the users and what resources of system are used to offer the services.

The history logs are the one which helps to keep track of the events which was already happening and change which have been made already in the system. It is sometimes useful in source isolating problem which was introduced by the change or other network events.

It is the tool which contains the information on system activities, related to system failure, recorded in the form of messages, warning messages and security vulnerabilities. These messages are sent to the QHST and dumped in some cases. This will help to troubleshoot faster, increase network performance, helps to tighten security and reduces system failure in the enterprise.

The general logs will be used to track the changes to configurations, starting, security auditing, stopping of service and refusing to stop. The windows server is the one which combines many of those log in the tool is called as event viewer that allows to view and also mange the application, security and system logs. It is necessary to check the event viewer whether something looks out of the place paying attention to the red alert messages.

The general log can be very useful when suspect an error and it provides the details what exactly that the administrator need to perform with it.

The traffic analysis is a process of examining and intercepting messages to deduce the information from the patterns in the communication. The more information which examine and intercept, the more can infer from a message. It is a true even if messages cannot be decrypted and encrypted. It will be done in a context of counter intelligence and military intelligence and it is the general security concern. The dedicated software programs like visual analytics, i2, orion scientific, memex and others will be used to do make traffic analysis techniques. If you want to install software or any appliances that will get normal traffic patterns and analyze traffic. Then make use of these to find an anomalies and be sure that to stay alert for any future attack on the network.

Most of the 3rd parties have developed equipment to perform the network test such as load, throughput tests and connectivity. Those products use both software and hardware to make recommendations and to analyze a network performance for the improvements. Companies like Fluke networks are specialized in software and equipment to evaluate and test networks. Consider these devices and its types to examine the network and find any abnormalities or weakness which will affect the network communication.

Learn the types of logs to gather and analyze the traffic. Syslog is the special standard one for Unix and Linux installations which is flexible and will help to obtain information about the software and devices in the network. Servers and windows clients use history logs, system logs and general logs collect information for the troubleshooting purposes. The system logs helps to examine the information about the network and also compare the baselines against a current log to just misconfiguration and to detect attacks. Be familiar with the traffic analysis tools which enable to examine and capture traffic data to decrease information from the pattern of communications. The network sniffer tools are the hardware components which have high degree of intelligences and performs network connectivity, throughput tests and load.

While selecting the tools for monitoring, then an admin has to decide if they like to use newer or proven system. Being able to analyze and monitor the networks is the major role for the network administrator job role. They can strive to maintain the network with good health and not to disrupt the productivity.the SNMP, and its version 2 and 3, history logs, syslogs, protocol analyzer, traffic analysis, general log and system logs are the resources to analyze traffic with network monitoring.