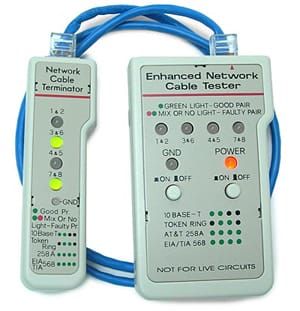 The cable tester is also known as media tester. It is defined as a range of tools which is proposed to test whether the cable works properly or not. Any tool which facilitates the testing of the cable can be considered as a cable tester. Anyway, the specific tool called the media tester which enables administrator to test a part of the cable, improperly attached connectors, cable faults or looking for shorts. Most of the media testers will confirm whether a cable works correctly and also where the issue on the cable exists.

If the patch cable which is made by the cable vendor, then there is great chance that it will be pinned perfectly and that a connector will crimped surely. Else, if inherit the patch cable which was made by some technician. If it is not possible to make connection from 1 device to another and suspect the cable, then fix it immediately by trying another cable for connection. If the new changed cable works properly, then the adjacent cable was faulty and may be it was not created correctly in the initial place.

Before starting repairing and throwing it away, it is necessary to use the cable tester to check whether there was any fault with it. If there was any fault it is easy to find fault on which wire or problem is located on wire. The cable is the tool with which connects both the ends of the cable to check its connectivity on its each wire. There are so many types of cable tester available and it differs greatly in design. Most of the cable tester uses LCD screens or lights to denote the connectivity via the cable. It will be very useful when it is required to take a decision whether to replace, continue to use, discard a cable or fix. 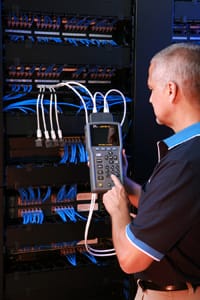 In todays most recent networks, it is not at all enough to say that the cable is working properly or not and it is proper setup. In case, if you install the CAT 6 type cable, then it has to provide bandwidth of 1000Mbps for the data. The only path that it can do this if all the patch panels, connector, wall jacks, and so forth are the things which should be installed properly. By using the device, it is possible to test all the network segments to compare the result and identify the fault. This testing device is known as a certifier.

The cable certifier is one among the type of tester which makes to certify cabling by checking it for performance and speed to check that this implementation can live up to a rating. Most tests and stress the system depend upon the error and noise testing. It is required to know whether the Gigabit cable which is running is providing necessary speed to the network. There are many different varieties of certifiers available and which is for fiber, copper and for wireless networks too. Some of the devices can combine few aspects of all 3 types of networks.

The wire crimper is the tool which helps to attach the media connectors to end of the cables. It is possible to use any 1 type of wire crimper to attach with the RJ-45 connectors on UTP- unshielded twisted pair cable at the instance. Additionally, different type of the wire crimper is suitable to attach to the British naval connectors to the coaxial cabling. To attach the RJ-45 type connector to end of the cable, for that it is necessary to strip nearly 1 inch of the outer insulation cable without cutting insulation on the 8 wires which are inside the cable. Then press hard down on the right side of the RJ-45 to close connectors around cable and hold the wire trapped wires into place so the cable sheath end is safely packed inside along the connector.

To establish this feat, it is necessary to use the tool which is designed to cut the insulation present outside and leave other wires. There are so many cable stripper and crimper design available over the years. Few tools double as cable strippers or crimping tools. 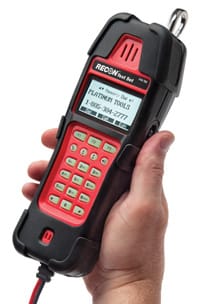 The butt set is associated with the telephony, it can also used for few data networks also. It enables the technician or administrator to butt a communication line as well as to use it. For phone line, the technicians can also use the line generally which are answer a call, make a call and listen into a call. This butt set for the telephony looks like a regular phone with handset with attached wires. The wires come from the handset will connect to the wire of the phone. Then the technician can access or test the phone line. The butt set also used to check the network telephony and has a limited.

The toner probe is the device which has 2 parts such as toner or tone generator and the probe or tone locator. The toner will send the tone at the cable end and the probe is the one which receives the toner signal. This is the tool which makes the process very easy to identify the end and the beginning of the cable. The tone locator and tone generator are referred to as hound and fox. The main purpose of the toner probe is to produce the signal which is transmitted on a wire while attempting to find. Then press the probe against single wires. While it maintains contact with a wire which has a signal, the locator will emit an audible tone or signal.

The punch down tool is also known as krone tool. It is a small hand type tool used by the network and telecommunication technicians. This tool is used for inserting the wire into the insulation displacement connector on the patch panels, punch down blocks, surface mount boxes and keystone modules. This tool also used to attach the twisted pair type network cable to the connectors within the patch panel. Most of the punch down tools are consisting of the handle, impact type, the removable slotted blade and also an internal spring mechanism. The wire has to pre positioned on a slotted post to use the krone tool and then the tool is pressed down onto the top of a wire, over a post.

To accommodate several connector types 110, BIX, 66 and punch down tool requires different kinds of blade. The removable type blades110 or 66 are almost double ended and few with single ended. For the light duty use, there are less expensive krone tool is available with fixed blades without impact mechanism.

The protocol analyzer is the tool which is used to analyze the network protocols including UDP, TCP, FTP and HTTP. This protocol analyzer can also act as a software as well as hardware based. Additionally, this tool is also used to identify malicious and wanted networks traffic, identify and clear the computer networking problem, alert the user when protocols unused and its related issues. Similar to packet sniffers, this tool capture communication stream in between the system. Additionally, unlike packet sniffers, this tool captures more network traffic and it decodes and read the traffics. This decoding will allow the administrators to check network communications in English. Through this, the administrator will get great ideas about the traffic, which is running on the network.

While troubleshooting the network device, it is necessary to check and confirm whether the network interface is functional. By attaching the loop back plug to the network interface, it is easy to perform such type of tests by running the diagnostic software which is using a loop back plug. The plug takes a transmit pin on the Ethernet connector as well as connecting it to get the pins. This loop back plug is also known as loop back cable or loop back adapter. This equipment facilitates the testing of network issues which is available at low cost. It is a 10 inch wire device with a plastic connector which isolate the network circuit issue at one end and made with RJ-45 type connectors , unshielded twisted pair and crimping device. It is also used to route digital data streams and electrical signals from a source back to the same origin to check the data transmission.

This TDR is referred as time domain reflectometer. This device is used to send the signals via the particular medium to test the cable continuity. The high quality TDR will identify many different types of cabling issues such as damaged conductors, severed sheath, loose connectors, shorts, faulty crimps and much more. However, the network administrator need not to use this tool every day, it provides significant assistance in most of the troubleshooting process. This time domain reflectometer assistance ensures that the data sent through the network will not interrupt by the poor cabling which may cause issues in the data delivery. This tool will work at the physical layer of OSI model, allowing the signal via length of the cable searching for cable faults.

It is referred as optical time domain reflectometer. By using this OTDR device, it is possible to identify how long in the cable break occurs. It is the optoelectronic instrument which is used to characterize the optical fiber. It injects the series of pulses with optical into a fiber under test. It is also used to estimate the overall attenuation and the fiber length. The OTDR is commonly used to locate the fault on the installed systems. This is available in different wavelength and fiber types. To match the common application. The OTDR testing at a greater wavelength such as 1625nm or 1550nm, will be used to find the fiber attenuation which is caused by fiber issues. The dynamic range of the OTDR is restricted by a combination of the optical pulse width, optical pulse output power, signal integration time and input intensity.

It is one among the easiest cable testing device which is used to check the shorts in the coaxial cable. The basic multimeter device combines many electrical meters as a single unit which can measure current, resistance and voltage. The advanced model of multimeter also helps to measure the temperatures. It is also known as multitester as well as volt ohm meter (VOM). In that, the analog multimeter is the one which uses a microammeter whose pointer will move over the scale calibrated for entire different measurements that could be made.

While coming to environmental monitoring, it is often refers the network equipment room and the temperature of the server. This helps to monitor issue on surrounding and helps to identify it.

It is important the administrator or technician must know the clear information about the hardware tools and how it could to be used for the different connectivity issue. From the above section, you can understand that the different hardware tools are used for different issue and helps to diagnose the problem in a simple and better way. It helps to achieve the assigned work in a better manner. It helps to monitor the network system rapidly and quickly. This hardware tool merely assists to troubleshoot the connectivity issues of hardware tools. In this, some type of tools are also used to trouble software component too.