The Enhanced Interior Gateway Routing Protocol (EIGRP) represents an evolution from its predecessor IGRP and this evolution is resulted from changes in networking and the demands of diverse, large scale internetworks. Enhanced IGRP integrates the capabilities of link state protocols into distance vector protocols. It includes the diffusing update algorithm. An automatic redistribution mechanism allows EIGRP routes to be imported into Enhanced IGRP and vice a versa, so it is possible to add EIGRP gradually into an existing IGRP network. Because the metrics for both protocols are directly exchangeable, they are as easily comparable as if they were the routes that originated in their own Autonomous Systems. In addition, EIGRP treats IGRP routes as external routes and provides a way for the network administrator to customize them.

EIGRP uses the following packet types: Hello and acknowledge, Update, and Query and Reply. Hello packets are multicast for neighbor recovery and do not require acknowledgement. An acknowledgement is a hello packet that has no data. Acknowledgement packets contain a non-zero acknowledgement number and always are sent by using a unicast address. Updates packets are used to convey reachability of destinations. When a new neighbor is discovered, unicast update packets are sent so that the neighbor can build up its topology table. In other cases, such as a link cost change, updates are multicast. Updates always are transmitted reliably. Query and reply packets are sent when a destination has no feasible successors. Query packets are always multicast. Reply packets are sent in response to query packets to instruct the originator not to recomputed the route because feasible successors exist. Reply packets are unicast to the originator of the query. Both query and reply packets are transmitted reliably. EIGRP uses a more gradual version of IGRP's metrics that is 32 bits v. 24 bits. It has faster convergence than any other IGP. It supports multiple routed protocols through protocol dependent modules. EIGPR relies on four fundamental concepts that are neighbor tables, topology tables, route states and route tagging. 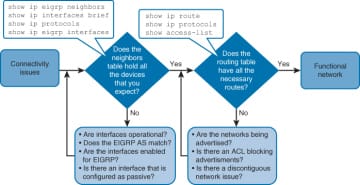 Neighbor Relationship and its authentication

The process that devices use to dynamically lean of other devices on their direct attached networks is the neighbor relationship maintenance. The device should be able to have knowledge about its neighbors being unreachable or inoperative. When devices periodically send small hello packets to each other with low overhead, neighbor relationship maintenance can be achieved. The working or functioning of the neighbor can be determined as long as hello packets are achieved. And the neighbor devices can exchange routing information after the status of the neighbor is determined. Some Enhanced Interior Gateway Routing Protocol (EIGRP) must be sent reliably to all neighbors. The EIGRP sends a single multicast hello packet that need not to be acknowledged as it has indication in the packet to inform a receiver. But when unacknowledged packets are pending, multicast packets are quickly sent by the reliable transport protocol. 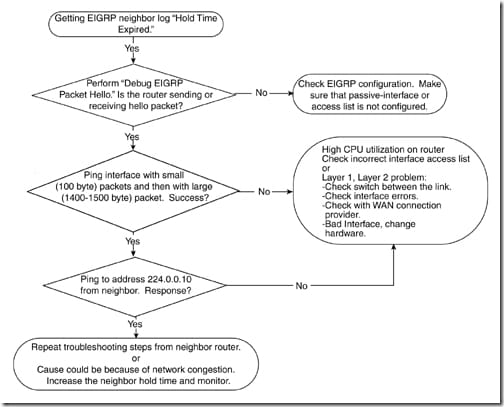 It is to be noted that the devices accepts packets only from devices that know the pre-shared authentication key as each packet that is exchanged between neighbors is authenticated. The neighbor uses unicast to communicate. Thus for security reasons, only those packets are allowed by devices that have same pre-shared authenticated key. This key is used to generate and verify a message digest which is a one-way function that gets attached to common network for each packet. EIGRP supports this message digest authentication to prevent the interface of any unauthorized information from unacknowledged devices. Hence, EIGRP authentication is configurable on a pre-interface basis for safety. Well, this is one of the drawbacks of EIGRP that it does not support secondary addresses as the routers does not form EIGRP neighbors over secondary networks. Instead, EIGRP always sources data packets from the primary address such that all routes are configured on a particular subnet with primary address that belongs to the same subnet. The bandwidth use can be reduced significantly by the implementation of partial and incremental updates means that EIGRP sends routing information only when a topology change occurs. By using autonomous system, the amount of processor resources is reduced in EIGRP.

In addition, the implementation of partial and incremental updates means that EIGRP sends routing information only when a topology change occurs. This feature significantly reduces bandwidth use. More than one EIGRP autonomous system can be configured on the same router by redistributing points where two EIGRP autonomous systems are interconnected. And within a single EIGRP autonomous system, individual router interfaces can be included. Running multiple EIGRP autonomous systems on the same set of interfaces on the router is recommended. As discrepancies in the EIGRP topology table can be caused if correct filtering is not performed at the redistribution points. The split horizon rule prohibits a router from advertising a route through an interface that is used to reach the destination by the router. When the EIGRP split horizon settings are changed on an interface, it resets all adjacencies with EIGRP neighbors reachable over that interface. Split horizon is turned on by default and should be disabled on a hub site in a hub-and-spoke network. Memory consumption on the hub-router of EIGRP can be increased by disabling split horizon on the spokes radically.

EIGRP are of three types, namely, Internal Route, Summary Route and External Route. In internal route, the routes are originated within the autonomous system whereas in external route, the routes are redistributed to EIGRP. In Summary Route, the routes are summarized in the router. Only hello packets are transmitted on a stable network, thus, there is very low usage of network resources during normal operation. When a change occurs in EIGRP, only routing table changes are propagated instead of entire routing table which reduces the load that routing protocol itself places on the network. The rapid convergence times for changes in the network topology. The actual number of supported neighbors depends on the conditions like memory capacity, processing power, topology complexity, and network stability. Thus, there are no limitations on the number of neighbors that EIGRP can support. EIGRP provides querying neighbors to find paths to lost destinations. 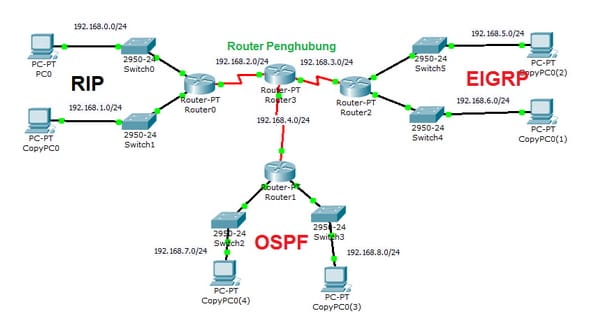 EIGRP balances well with a developing network which includes complexity in design, configuration, and maintenance. EIGRP neighbor relationships, routes in routing table, and authentication are the components of EIGRP troubleshooting. Troubleshooting routing protocols ensures that communication between the routers does exist. If the neighbor relationships are established, routes can easily communicate. If there exists, no communication between the routers, the next step is to troubleshoot EIGRP routing table issues. Routes are filtered from an EIGRP routing advertisement as they come in from a neighbor or as they sent out to a neighbor by route filtering. But, by default, EIGRP performs automatic network summarization as it causes connectivity issues in discontinuous networks. The route filtering causes the missing of EIGRP routes from the routing table. The information mismatch between network commands and hello packets can cause EIGRP neighbor problems. Configuring EIGRP authentication requires several aspects, such as creating a keychain, specifying a key string for a key, and configuring EIGRP to use authentication. The concept of key chains is used in EIGRP and each key chain can have many keys. Different lifetime interval of each key is to be specified. Thus, in case, if first key chain gets expired, other key chain can be used and then after EIGRP authentication for a particular interface can be enabled.

By default, EIGRP uses up to 50 percent of the bandwidth declared on an interface or sub interface. EIGRP uses the bandwidth of the link set by the bandwidth command, or the link's default bandwidth if none is configured, when calculating how much bandwidth to use. A single EIGRP process is analogous to an area of a link-state protocol. However, within the process, information can be filtered and aggregated at any interface boundary. In order to bond the propagation of routing information, summarization to create a hierarchy can be used.

The Enhanced Interior Gateway Routing Protocol can reduce the routing transition time to less than 50 milliseconds with the help of the EIGRP Loop Free Alternate Fast Reroute feature. This can be achieved by pre computing repair paths or backup rotes and installing these paths or routes in the Routing Information Base. The pre computed backup routes or repair paths applied in EIGRP are referred as feasible successors or loop free alternates. To enable traffic that traverses a failed link to be rerouted around the failure, Fast Reroute technique is used. It is to be noted that only those paths are protected which are reachable through point to point interfaces.

The most important feature of EIGRP is that it is a distant vector routing protocol that is the reason why EIGRP routers know only of those routes that are advertised by directly adjacent neighbors. Now, suppose a case when a network to determine the destination of the router is removed from the EIGRP topology then a different route to locate that destination is required. In attempt to route to that destination a router initiates a route querying process. In this process, the neighbors are asked if they have a path to a route whose destination is to be determined. This query process is a simple process in concept but appears quite complicated when observed in operation on a live network. This process appears to be in contrast with link state routing protocol. As in link state routing protocol, each and every router already have a complete picture of its link-state area. Thus, the route querying process is not preferred in EIGRP topology. A new approach known as feasible successors is met which automatically creates backup routes for the EIGRP routers. Firstly, the term successor should be understood to know the concept of a feasible successor route. The term successor is meant as one thing that succeeds another or it simply refers to the next hop of the best route. This relates with the concept of feasible successor that applies in case a successor route disappears. The feasible successor route is the one which can be used as second option if the current best route cannot be operated. The feature of feasible successor route is that the successor route for any given destination is chosen as having the lowest computed feasible distance. The feasible distance can be related as the lowest sum of reported distance in addition with the cost to get to the advertising router. Since, each destination is advertised by EIGRP router which can be reached as a route with an attached metric called route's reported distance. To become a feasible successor, achieving the destination is not enough instead; there exists a feasibility condition that must be met to qualify. The feasibility condition states that in order to qualify as a feasible successor, the reported distance to the destination must be lower than the feasible distance.

Major attributes of EIGRP that distinguish it from other routing protocols include fast convergence, support variable length subnet mask, support for partial updates and support for multiple network layer protocols. EIGRP queries its neighbors to discover an alternate route. These queries propagate until an alternate route is found. It support for variable length subnet masks permits routes to be automatically summarized on a network number boundary.