The Network address translation offers the method of modifying the network address information in the IP datagram packet headers when they are in transit over the traffic routing service to remap one Internet protocol address space into the other. In the below section, IPv6 NAT topic is discussed in detail along with the NAT64 and NPTv6. Then learn how to configure and verify the IPv4 network address translation. It also includes static NAT, dynamic NAT, PAT.

The term NAT44 is used to specifically indicate the mapping between 2 IPv4 addresses and this is the most typical case when IPv4 carries majority traffic on the internet. The NAT64 refer to a mapping of the IPv4 address to the IPv6 addresses or vice versa.

The NAT permits the ISP and enterprises to masquerade private network address space only to the publicly routable IPv4 address on an internet interface of the customer premise router rather than allocating the public address to every network device. Given below is the example of configuring IPv4 mapped NAT-PT as follows:

Verify the configuration by using the "show" command.

It configures the persistent 1 to 1 address translation rules by mapping the real IP address to the mapped IP address. 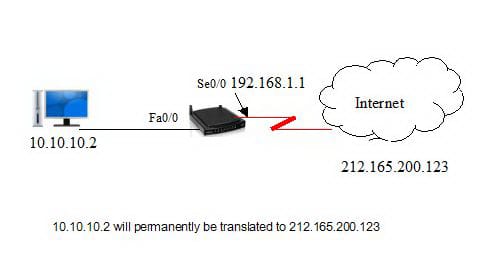 The configuration pointed above creates the permanent entry in a NAT table and enables both outside and inside hosts to initiate the connection.

The dynamic Nat translates the group of a real address to the mapped address pool which are routable on a destination network. A mapped pool can include fewer address than a real group. When the host you like to translate access a destination network, an ASA assigns a host the IP address from a mapped pool. A translation is added when a real host initiates the connection.

The dynamic NAT uses the pool of the public address and also assigns it on the first served and first come basis.

When the host with the private IP addresses request access to an internet, the dynamic NAT selects the IP address from a pool which is not already in the use of the other host. The dynamic host is very useful when some addresses are available than an actual number of the hosts that to be translated.

Example for the dynamic NAT configuration:

When the static NAT offers the permanent mapping between the internal addresses and the certain public, the dynamic NAT maps the private IP address to public addresses. The public IP address come from the NAT pool.

The PAT translates the multiple real address to the single mapped IP address by simply translating a real address and the source port to a mapped address as well as unique port. With PAT multiple users may use one IP address at a time. PAT is also called as NAT overload. It is common to hide the entire IP address space, consisting of the private IP address, and behind the single IP address in the other address space. This type of NAT is also called as PAT in overload. A dynamic entry strays in a table as long as the traffic flows occasionally. With the PAT in overload, the translation does not exist in a NAT table until a router receives traffic which requires translation. The translation has a timeout period after that they are purged from a translation table.

The IPv6 has the vastly larger address space than an impending exhausted IPv4 address space. The IPv4 is extended by using the techniques including NAT, that allows for rages of private address to be represented by the single public address and also temporary address assignment. In this, there are a variety of techniques to offer the transition mechanisms for a legacy IPv4 host to maintain the connection to an internet. The IPv6 Nat offers the address translation between the IPv4 as well as IPv6 addressed network device. Additionally, it offers address translation between the IPv6 hosts. The NAT between IP version 6 host is mainly done in the similar way and also for similar purposes like IPv4 NAT. The IPv6 NAT provides 3 NAT types such as source NAT, static NAT and destination NAT.

The dual stack is the transition technology in which the IPv4 and IPv6 operate in the tandem over the dedicated or shared links. In the dual stack network, both IPv6 and IPv4 are deployed fully across the infrastructure, hence the routing protocol and configuration can handle both the IPv6 and IPv4 adjacencies and addressing.

All viable translation scenarios are mostly supported by the NAT64 and hence NAT64 is becoming the sought translation technology. The AFT using the NAT can be completed either by stateful or stateless. By using the tunneling option, an organization can build an overlay network that the tunnels 1 protocol through the other by encapsulating the IPv6 packets within the IPv4 packets and also IPv4 packets within IPv6 packets. 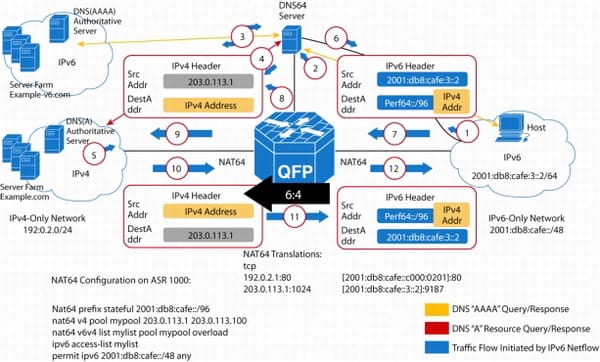 The above figure summarizes the necessary steps needed for the NAT64 translation on the Cisco AS 1000 series running the stateful NAT64 when the Greenfield IPv6 only network access service provided and residing in the existing IPv4 network and internet.

The applications without the corresponding application layer gateway cannot properly with a stateless NAT64 translator. The multicast is not supported. The translation of the IPv4 options, hop by op extension headers, IPv6 routing headers, source routing headers and destination option headers are not supported. The IPv6 packets with the zero UDP checksum are not translated. The fragmented IPv4 UDP packets which do not contain the UDP checksum are not at all translated. 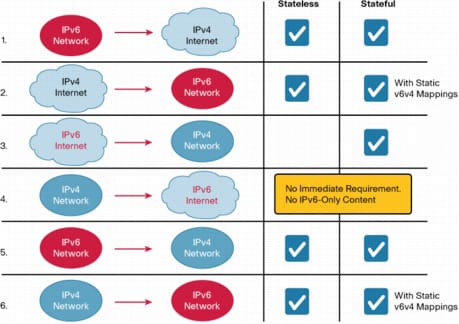 The NPTv6 can be implemented in the IPv6 router to map one IPv6 address prefix to the other IPv6 prefix as each IPv6 datagram transit a router. The router which implements the NPTv6 translation function is considered as the NPTv6 translator. The NPT stands for network prefix translation. NPTv6 involves modifying the IP headers in the transit, hence it is not compatible with the security mechanism, including IPsec authentication header, which offer integrity protection for an IP header. The NPTv6 can interfere with a use of application protocols which transmit the IP address in an application specific portion of an IP datagram. The default NPTv6 address mapping mechanisms are purely algorithmic, hence the NPTv6 translators will not required to maintain per connection or per node state, permitting deployment of the more robust and also adaptive network than can deployed by using NAPT44.

1. One or more external interface with its external routing domain prefixes

2. One or more internal interface with its internal routing domain prefixes.

The NPtv6 intended the lightweight stateless NAT solution which only translates a network prefix and not the full IPv6 address. It is the one to translate which needs no state on the routers and also preserves the end to end reachability to a network layer.

The network address translation is the way to map the entire network to the single IP address. This NAT is essential when the number of the IP address assigned to you by the ISP is less than the total number of computers which you like to give internet access. The NAT64 to offer IPv4 preservation through PAT. The IPv4 NAT and ipv6 NAT discussed in this section will get you to know how to configure and verify the protocols.