The concept behind the VPN has been around some time now and the problem in the past years has been that the configuration of the VPN was typically the point to point and static in nature. But now, the implantation of the DMVPN provides the ability to get around both of the previous limitations. The DMVPN deployments provide the ability to configure the dynamic virtual tunnels that can be automatically created depends on the traffic needs and the certain topology. Based on the certain configuration, it is possible to have the virtual tunnels be created between the spoke sites to remove the load from a hub router. This section takes a look at the most available DMPVN and the easy virtual networking concepts in detail.

The DMPVN stands for the dynamic multipoint VPN. It is the Cisco IOS software solution for building the IPsec VPN. The Cisco DMVPN uses the centralized architecture to offer easier implementation as well as management for the deployments which need granular access control for diverse the user communities such as telecommuters, extranet users and mobile workers. There are different ways to implement the DMVPN based on the specific need of a traffic being transmitted and the type of hardware being used and since there are a variety of options, just take single hub DMVPN in this section. The DMVPN configuration is very simple, if they have knowledge and worked with the GRE tunnels.

The DMVPN is the Cisco answer to an increasing demand of the enterprise companies to connect branch offices with the head offices and between each other when keeping costs low, increasing flexibility and minimizing configuration complexity. With the DMVPN, 1 central router is usually placed in a head office, undertakes a role of the hub when all other branch routers are spokes which connect to the hub router. So that the branch offices can easily access the resources of the company. The DMVPN comprises of 2 deployment designs such as DMVPN hub & spoke and DMVPN spoke - to - spoke. In both the cases, a hub router is assigned the static public IP address when the branch routers will be designated dynamic or static public IP addresses.


Configuring DMVPN on a single hub:

This scenario is used for the service provider providing the DMVPN connectivity to 2 unrelated customers and both the customers require connectivity among the own sites and to the internet service provider, but not able to communicate with each other. In the same way, each customer should use their own unique preshared key for the authentication. Take the example of the below: 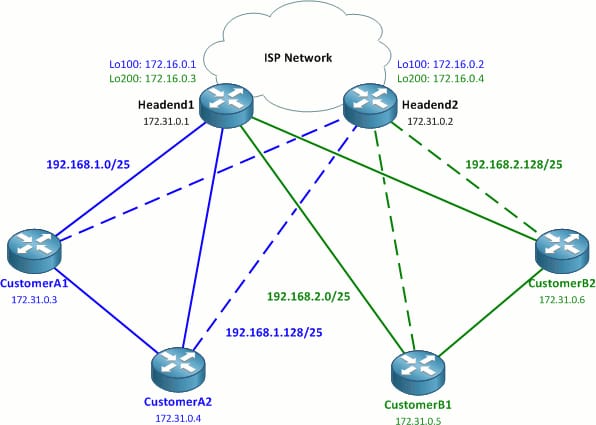 In the above figure, the 172.16.0.0/20 space denotes the public address space and in the real world deployment, that will be effectively a random public IP addresses. The 2 internet service provider headend router connects the 4 sites, 2 per user/customer, to an ISP network. Every headend router has the 2 loopback interfaces to that the DMVPN tunnels can be terminated.

AS per Cisco design, every customer can have 4 redundant DMVPN tunnels, 1 to each headend router. It adds up to the total of 4 DMVPN networks. Remember that the lab may some muddy too sometimes.

Single ISAKMP policy and the IPsec transform set is common to all the routers in the configuration. Let us see the crypto configuration first which will lay foundation.

Then configure the needed crypto profile on a headend routers. The ISAKMP and the keyrings are explicitly sources by the loopinterfaces. It ensures that the right preshared keys are applied to the every DMVPN spoke router depends on a destination IP address of the incoming encrypted packet. 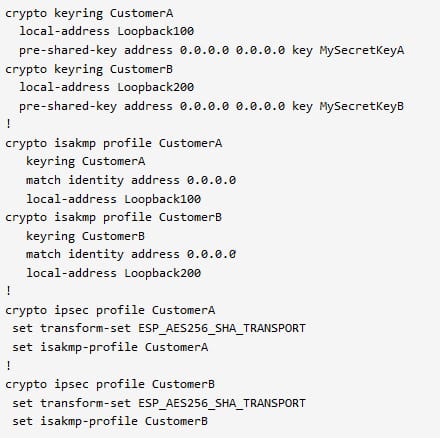 The spoke router configuration is similar to the headend router, but simple, because only adding the configuration applicable to a respective user or customers. Here single wildcard mask is used to match the preshared key.

Configuration of customer A routers as follows:

Configuration of customer B routers:

First, create the 2 unique tunnels on the 2 headend routers, with one in either VRF of the customer. 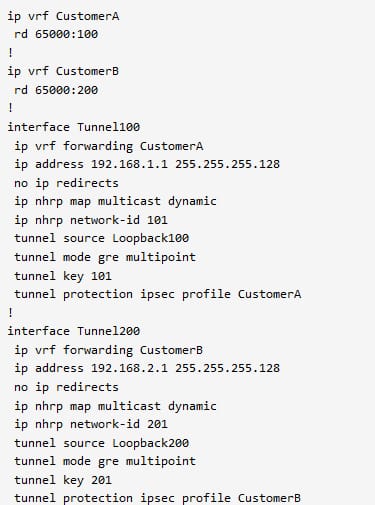 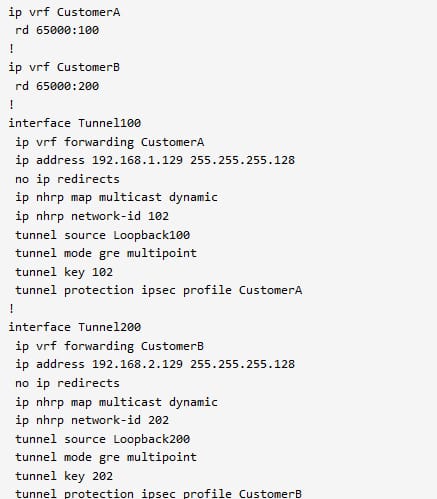 Configuration of customer A1: 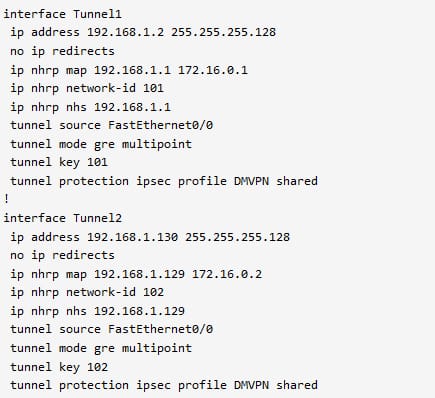 Configuration of customer A2: 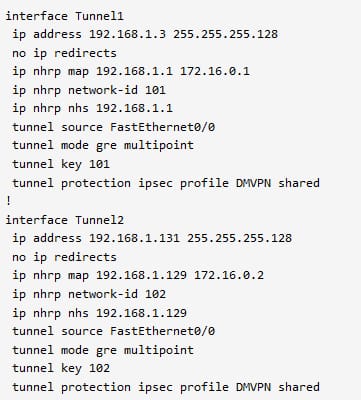 Configuration of customer B1: 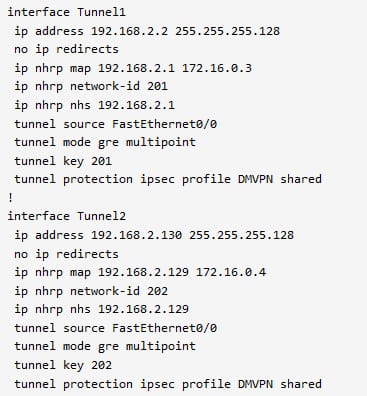 Configuration of customer B2: 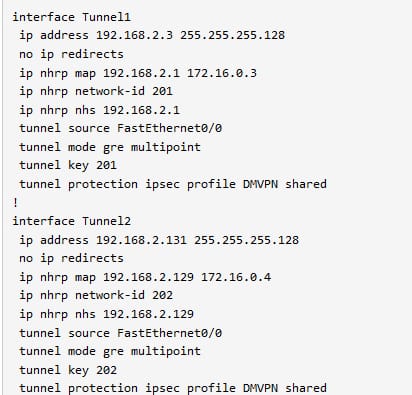 The benefits out of the DMVPN is very higher than the others. It lowers the operational and capital expenses, simplifies the branch communications, improves the business resiliency and reduces the deployment complexity. It prevents the disruption of the business critical application as well as services by simply incorporating the routing with the standard based IPsec technology. It offers the zero touch configuration, which dramatically decreasing the complexity of deployment in the VPN. It enables the direct branch to branch connectivity for the business applications such as voice.

The network virtualization is the economical way to offer traffic separation. The multiple virtualized network can be overlaid on the single physical infrastructure. The corporation can require to offer separation in between the different user groups. Several well adopted network virtualization solutions are widely available. In that the Easy virtual networking is the simplified LAN virtualization which helps to enable the network managers to offer service separation on the shared network infrastructure. The EVN is the IOS software innovation to multi VRF deployments without changing any switching protocols and existing industry standard routing protocols.

Before configuring the EVN you must have the functioning campus design before adding the virtualization to the network, understand the VRF instances and how to maintain the traffic separation over the network and for implementation it needs the single IP infrastructure.

EVN offers the below benefits: Increased business flexibility due to the decrease in an infrastructure needs for maintaining the traffic separation via the network core. Reduced capital expenditure by not having to keep maintain the separate physical infrastructure to maintain the traffic isolated. EVEN is very compatible with the VRF lite.

The VRF were born from the MPLS - VPN and grew into an adolescent with the VRF lite. Now EVN brings VRF into the maturity enhanced and simplified VRF lite. The ASR1k is the first platform which supports the EVN. In the LAN trunks, the sub interface inheritance and VLAN ID re-suse will take place. The IGP based shared services will take place in the route duplication. The usability and enhanced troubleshooting by using the command such as traceroute, debug condition, routing context and cisco vrf-mib. 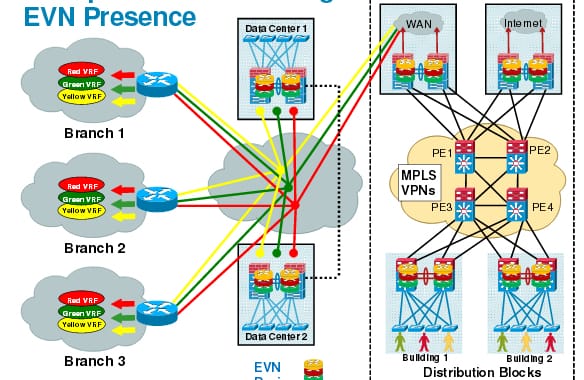 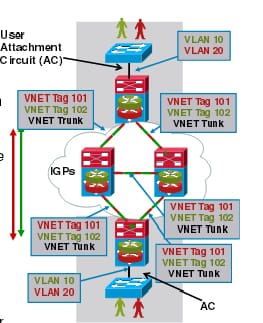 Define the VRF at the 1st L3 device and also map an L2 VLAN to the proper VRF.

Define the VRF on all the other L3 device in a network.

Configure as VNET trunk all the physical links, which connecting to the L3 devices in a network core.

Enable the routing protocol in the every VRF.

The traffic is carried to the end to end across a network which maintain the logical isolation in between the defined group.

The single trunk interface will transport the multiple VRF traffic. The trunks are pre provisioned for the new VRF. 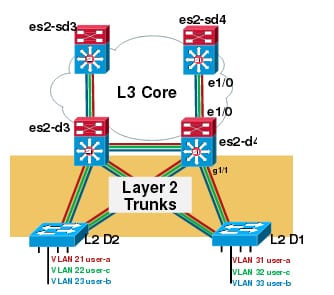 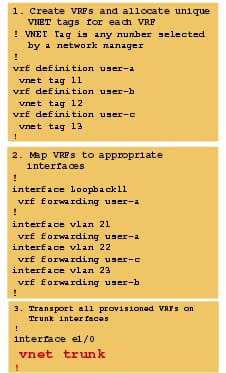 The VNET tag # is defined for the every VRF used as the part of numbering the sub interfaces. Every sub interface will inherit the same characteristics from a main interface. Unless the VRF filters are applied, the trunk interface can transport the traffic to all the provisioned VRF. While creating the VRF sub interfaces, the vnet tag is mainly used. This tag also used with the encap dot 1q. The best practice to change the vnet tag so verf sub-int is created by removing the old vnet tag and configuring the new vnet tag.

Hopefully, this content will enable you to have the general understanding of what possible when deploying the DMPVN and description of the DMPVN single hub. The possibilities available via the DMPVN solutions will provide the network designers lot of interesting and valuable options which enable the very scalable dynamic VPN design. The engineers and network professionals have to understand this concept truly about this technology. Deliver path isolation and traffic separation capabilities of the shared network infrastructure with the EVN. The EVN takes the advantage of the existing virtual routing and forwarding lite technology to simplify the layer 3 network virtualization, enhance, manage and troubleshoot and improve support for the shared services.