The distance vector, hybrid and link state are the 3 types of the routing protocols. In that, the distance vector routing algorithm will send the complete routing table and its information to neighbors. The RIP is the distance vector protocol type which has 2 version such as RIPv1 and RIPv2. In the below session, the configuration, verification and troubleshoot part of the RIPv2. As the new technology grows rapidly, the importance for the version 2 is higher than the version 1. In that version 1 is classful and version 2 is classless and the routing updates are multicast.

The RIPv2 is the classless, distance vector routing protocol as defined in the RFC 1723. It means that it also includes a subnet mask with a network address in the routing updates. The RIPv2 also supports the CIDR supernets, discontiguous networks and VLSM. Due to the difficulties in the RIPv1, the RIP v2 was developed. It is equipped with the capability to support the subnet information and also supports the classless inter domain routing. The router which receives routing updates from the multiple routers advertising a same classful summary route will not find which subnets belongs to the which summary route. It is the inability which leads to the unexpected results such as misrouted packets. The next hop address is included in the updates and the authentication is an optional one in the RIPv2. However, with the RIP version 2 automatic summarization will be disabled with no auto summary command. Then the automatic summarization has to be disable to support the discontiguous networks. The RIP version 2 maintains 15 as the hop count limit and also incorporated the password authentication mechanism. Even though the passwords are transmitted in the clear text format, that is found insufficient for the secure communications on an internet. The RIPv2 is an enhancement of the RIP version 1 extensions and features instead of an entirely new protocol. In that, the enhanced features in version 2 are such as:

The similarities between the RIP version 1 and version 2 are as follows:

The administrative value for the RIP version 2 is 120 and it is used in the flat networks, small or at the edge of a larger network. It uses the UDP port 520 and supports the VLSM. The metric is the router hop count and the periodic route updates sent each 30 seconds to multicast address 224.0.0.9 and 25 routes per RIP messages and 24 if authentication is used.

The RIPv2 is almost similar as the RIPv2, but there are some more important differences which make the RIPv2 as more scalable than the RIPv1. As it is a distance vector protocol, each router running RIP sends the complete routing tables on all the active interfaces at the periodic time intervals. Additionally, the loop avoidance scheme and timers are the same in both of the RIP version as stated above.

The configuration of the RIP version 2 is straightforward. Given below is an example:

Here, all you need to perform is just add the command as version 2 under (config-router)#prompt and running RIPv2.

The redistribution command is the way to disseminate the static route from 1 router to another through the routing protocol. While comparing the RIPv1 and RIPv2 message formats, the RIPv2 message format is same as that of the RIPv1, but has 2 extensions. The first extension is a subnet mask field. In this first extension, it allows the 32 bit mask to be included in the routing information protocol route entry. Then the receiving router has no longer depends upon a subnet mask of an inbound interface or a classful mask while determining the subnet mask for the route. Then the second extension is the additional of next hop address. In that the next hop addresses are used to analyze the better next hop address, suppose only one exist, then the address of a sending router. If the field is set to all as zeros(0.0.0.0), then the address of a sending router is a better next hop address. given below is the comparison of the RIPv1 and RIPv2 message formats. 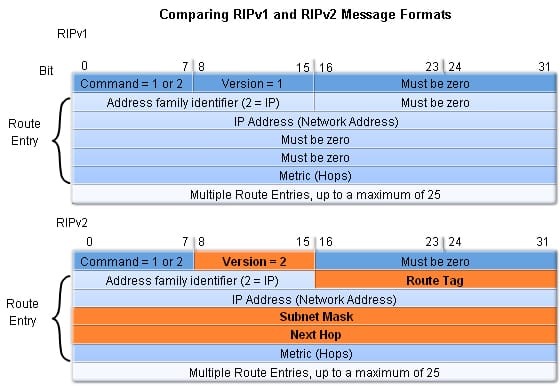 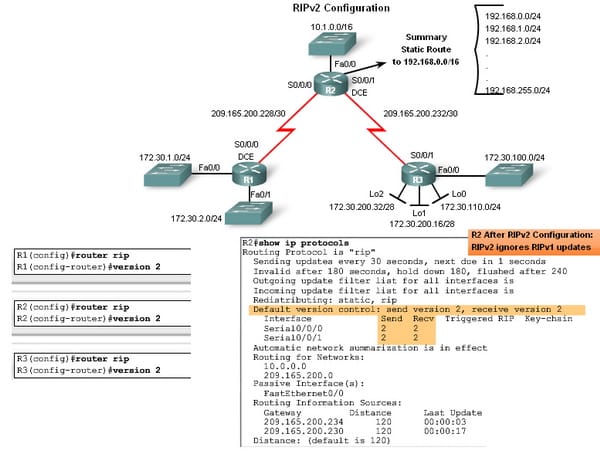 Configuring the RIPv2 needs using the version 2 commands and the RIPv2 will ignore the RIP version 2 updates also. The RIPv2 will automatically summarize the routes at the major network boundaries and also can summarize routes with the subnet mask which is smaller than the classful subnet mask. 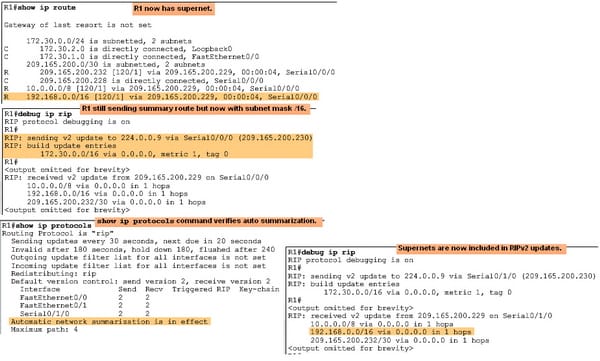 After that it is essential to disable the auto summary in the RIP version 2. In that to disable the automatic summarization issue the no auto summary command is used. While using the RIPv2 with the automatic summarization turned off, there each mask and subnet has their own certain entry along with an exit interface as well as the next hop address to reach that subnet. In this step, to verify the information is sent or not from RIP version 2 will use the command of "debug ip rip".

? To verify RIPv2 is configuration, use the below command

When the network uses the VLSM IP addressing scheme. Use the classless routing protocol (RIPv2) to disseminate the network addresses and its subnet mask. When it comes to CIDR, it will use supernetting. The supernetting is the bunch of a contiguous class network, which is addressed as the single network. 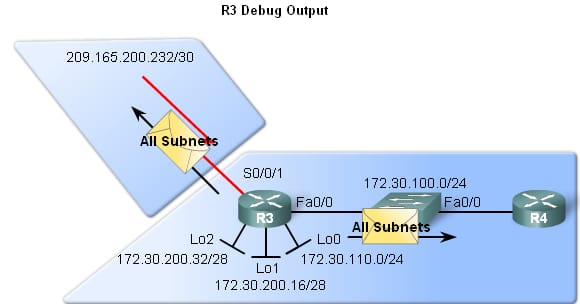 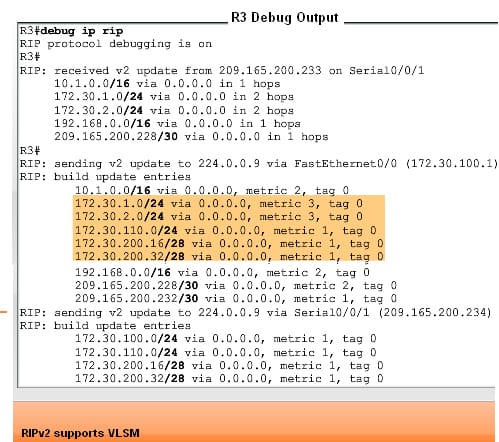 In this, to verify that the supernets are sent and received or not use commands like "show ip route" or " debug ip route".

The configuring the routing protocol is not much difficult, but to troubleshoot issue will be very challenging to the less experienced designer. Anyhow, the competent designer with more practical knowledge can able to foresee and also prevent the occurrence of the future troubles.

Detect the issue by starting from basics. It is important to verify whether the cables are connected properly or not. It is the major issue that the designer fails to perform before taking any step to troubleshoot the issue. Check whether all the interfaces are up as well running well in good condition. Then check the IP addresses that are configured correctly with a right subnetwork. As it is the RIP version 2, check whether the version 2 is enabled or not. Then verify the routing addresses which are implemented correctly or not. To determine routing table in detail, disable the automatic summarization. Check the status of the links connected to the protocol and IP address. Remove all the unneeded configuration commands which are not required to perform this RIPv2 configuration and check the subnet mask configuration. There are several ways to verify and troubleshoot the RIPv2.

There are many commands used in the RIP version configuration and verification as shown in the below diagram. 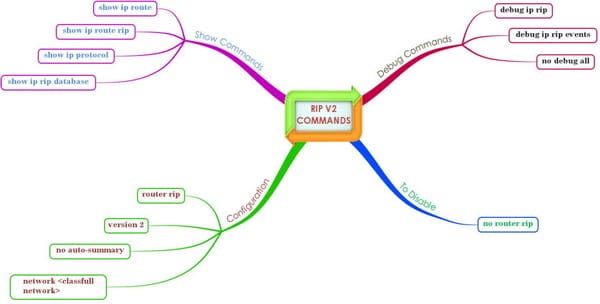 The commands used to verify the operation of the RIP version 2 is as follows:

This command will assist to determine the network of the IP address which is currently as either remotely or directly connected. While this command shows all the routing table, you can use it to find which Routing information protocol route is in the routing table with the help of show ip route command.

This command helps to display the current state and parameters of the active routing protocol process. It also allows to verify the automatic summarization status. It also verifies several critical items such as verify the RIP is enabled or not, checks the version of the routing information protocol, the automatic summarization status as well as the networks which were included in a network statement. Then the routing information source listed at a bottom of output are an RIP neighbors from which that router is receiving updates currently.

This excellent command used to examine the routing update contents that are sent and received by the router. There will be many times when the route is being received by the router but it is not being added to a routing table. The static route can also be configured for a same network, which is being advertised. By default, the static route has the lower administrative distance than any of the dynamic routing protocols, and it will take the precedence in being added to a routing table.

It verifies which interfaces are configured with the IP address and also whether it is in down or up state.

It is one among the useful command helps to verify the running IP interface or other configuration that is in its entry. This command will be used to check the entire commands which is configured recently. Normally, other commands are very efficient and offer more information than the simple current configuration listing. Although, this command is useful in finding if anything obvious was misconfigured or forgotten.

When troubleshooting the Routing information protocol examine the version. It is important that to configure the RIPv2, you need to use only RIPv2. Check the network statements which are correctly typed or anything missing in the statements. If the summarized routes are not at all needed, then disable the automatic summarization. It is really good to authenticate the routing information. Because it prevents the possibility of getting invalid routing updates as well as the contents of the routing updates are encrypted. The EIGRP, IS-IS, BGP, OSPF and RIPv2 are the types of routing protocols which can be used for the authentication process.

When it comes to the internal routing protocols, the routing information protocol version 2 plays an important and common routing protocol which is used widely. This RIPv2 is the most important one that every network administrator and designer has to know to perform the tasks in their routine activity. It is one of the easiest protocols to configure, but needs dedication and deep knowledge to verify and troubleshoot the RIPv2. The above session will get you understand the configuration of the routing information protocol version 2 and why it is more important than the earlier version 1. In addition to that, you can learn how to verify and troubleshoot the RIP version 2. The RIPv2 is the valuable tool which gives a simple and quick IP routing and it must be in each network administrator toolbox also. It overtakes most of the limitations that seems in the version 1 and version 2 has more features than before.