The EIGRP is commonly the routing protocol of choice when using the network with no requirement for the cross vendor operation. The EIGRP supports multiple routed protocols, including IPx, AppleTalk and IP. The EIGRP evolved from the predecessor, IGRP which is the classful routing protocol like RIPv1. The EIGRP in and of it themselves is the hybrid routing protocol that has the characteristic of both link state protocols as well as distance vector protocol. This session will get you to understand how to configure and verify the EIGRP stubs, EIGRP load balancing, EIGRP neighbor relationship and authentication.

Much like the RIP using a triggered feature, the EIGRP update is sent when the change in a network is identified. At first, the EIFGRP routers will form the neighbor relationship as well as exchange the topological information. After that the routing protocol sends the periodic hello to ensure whether the neighbor is still there or not. Although, when the route changes or link goes down, update is then sent to the neighboring routers through multicast 224.0.0.10 by using its own internet protocol number 88. The EIGRP uses the DUAL which ensures the loop free routing domains by maintaining 2 separate routes in an EIGRP topology table called as successor as well as feasible successor route.

The EIGRP maintains the 3 separate tables such as the routing table, topology table and the neighbor table. If the route goes down and also no feasible successor exist for a route, the EIGRP can query neighboring routers to see that there is any alternate route is available to a failed route. In the poorly designed network, the EIGRP queries will be downfall of a network as the EIGRP route will become a Struck In Active - SIA. If the query response is not getting back from the router in the allotted time a neighbor relationship is dropped and also any routes which is associated with the neighbor relationship is purged resulting in the dropped packets when the network is re-converging.

When configuring the EIGRP neighbor, then the neighbor statement is needed on both of the ends of a neighbor relationship in an EIGRP routing process which operate in a same autonomous system. Take the below topology for example. 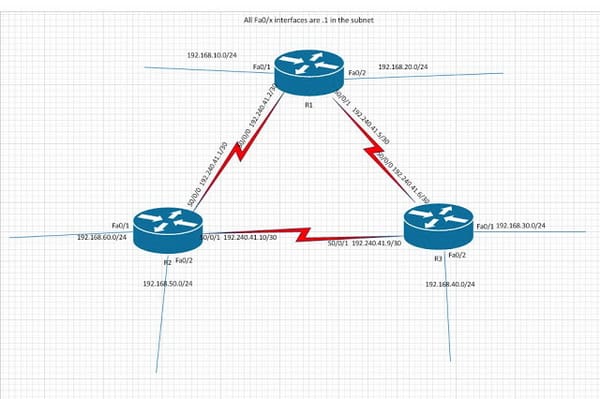 Make sure that all the interfaces are configured in right method.

In the configuration mode, make an enter as a router eigrp asn# command. This command will make the EIGRP process on a router.

To perform the network statement the below command turns on the EIGRP on any interfaces with the network address which falls into a range configured in a network command. Here narrow the selection down with the help of wild card mask option.

For example: On R1

It will simply turn on the EIGRP on all the R1 interface, it is because the command is valid for the entire addresses on a router.

The verification of the EIGRP includes many commands as follows;

It will display information about every routing protocol which is running on a router. You can get a passive interface with this command.

It lets you view the routing table used by a router. The routes which came from the EIGRP can be marked with the Dual as "D". The internal routes from the EIGRP have the AD of 90.

It lets you view the EIGRP process in the topology table.

It allows you to see the neighbor router. It will not display any of the routers which are supposed to be the neighbors but not due to error.

It will display what interface is participating in the EIGRP, but it will not display the passive interfaces.

The EIGRP stub feature improves the network stability, simplifies the stub router configuration and reduces the resource utilization. The stub routing is used commonly in a spoke and hub network topology. In the spoke and hub network, 1 or more ends networks are connected to the remote router which is connected to 1 or more distribution router. The typical connection in between the spoke and hub router has less bandwidth than the connection in a network core. Hence, attempting to use that connection as transit route will typically result in the excessive congestion. The EIGRP stub routing will prevent this issue by simply restricting a spoke router from advertising a route from the hub router to the other hub router. Then, as a result, hub router might notice that there an alternative route via the spoke router. Although, a stub routing is not able to stop a Hub router from advertising routes to the spoke router. The manual summarization is needed on a hub to advertise the default route to a spoke. Any neighbor that gets the packet informing it of a stub route cannot query a stub router for the any routes and the router which has the stub peer cannot query the peer. A stub router can depend on the distribution router to send a proper update to all the peers.

Configuring the EIGRP stub routing may tear down the existing Enhanced IGRP neighbor relationship. Verify a stub configuration on the R5 by using the show ip eigrp neighbor detail EXEC command on the R5.

When the router learns multiple routes of the certain network through multiple routing processes, it installs a route without the lowest AD in a routing table. The EIGRP puts up to 4 routes of equal cost in a routing table, which a router then load- balances. The load balancing type is mainly depends on the switching type done with a router. Although, the EIGRP also load balance over the unequal cost links. The coming section will give you idea about both the equal and unequal cost.

The equal cost load balancing is the router's ability to distribute the traffic over entire routes which have a same metric for a destination address. The entire IP routing protocol can perform the equal cost load balancing. The load balancing increases a utilization of the network segment, since increasing the network bandwidth. As default, the IOS balance between the maximum of 4 equal cost path for the Internet protocol. With the help of maximum paths router configuration command, you can also request that up to 16 equally good paths be kept in a routing table. So set the maximum path parameter to one to disable the load balancing. 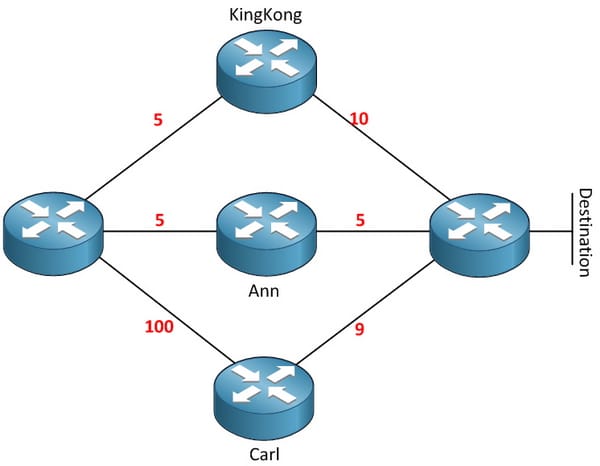 109 values are higher than the 20, here you could not load balancing

If you set a variance at 5, then you will get:

109 is still higher than the 50, but still no load balancing will occur.

Here, 109 is lower than the 110, now you can put the feasible successor in a routing table and also start load balancing.

The EIGRP has the ability to use the unequal cost load balancing in the same as that of the IGRP. A router uses the variance as the multiplier in selecting the upper boundary of the route with a greater metric. The EIGRP has the consistent perspective of the network metrics. It also aids in making the route show up in an IP forwarding table.

To configure any unequal cost load balancing follow the below:

The EIGRP is the extremely common routing protocol due its simplicity and its ease of configuration. The EIGRP neighbor relationship and authentication are discussed with configuration and verification. The EIGRP stub routing is an effective method for limiting or restricting the query range, hence conserves the bandwidth due to the unnecessary queries, improves network stability and prevents the SIA events. The EIGRP has the ability to distribute the traffic over entire routers which have the same metrics for a target destination which is the equal cost load balancing. The EIGRP also distribute the traffic over the router which have the different metrics, this is the unequal cost load balancing.