How to Configure and verify EIGRP for IPv6

The below section will describe you how to configure and verify the EIGRP for IPv6. The EIGRP is the enhanced version of an IGRP. It is the enhanced distance vector protocol, which relies on a diffused update algorithm to determine the shortest path to the destination within the network. The EIGRP for IP version 6 will work on the same way as EIGRP IP version 4, where it can configure and managed separately.

The EIGRP is inherently the multicast routing protocol because it will support for the non IP protocols. The mechanisms and configuration techniques will slightly vary from the IPv4 to IPv6. The engineers or professionals who have worked with the IPv4 will able to get the IPv6 concept very easily. The EIGRP maintains the feature parity over the protocols, when appropriate. Because of this difference, the operation and configuration will slightly differ.

There are few major differences between the version 4 and version 6 are such as:

To address certain issues in the IGRP, the Cisco created an enhanced version of the EIGRP which is significantly more capable than the IGRP. To advertise the routing information whenever necessary, there is the change without the need of router to advertise that periodically, the layer 3 independent, transparent protocol is capable of the reliable multicast and unicast delivery. To maintain the loop free operation at each instant, the EIGRP uses the feasibility condition to identify the neighbors, offering the guaranteed loop free path to the given destination. It will allow the EIGRP router to avoid the forwarding packets to the neighbor from the routing loop.

The Internet protocol version6 packet is disabled by default. To enable the IPv6 packet forwarding, it is important to use the command of ipv6 unicast- routing in the global configuration before enabling the EIGRP. The router ID is the mandatory one for the IPv6 EIGRP to function properly. Suppose, 1 is not configured manually, one will be generated with the help of the physical interface or loopback. Unlike the EIGRP for IPv4, IPv6 may not require the use of the command network to advertise the network. This command has to be configured on all the router interface which are participating in the EIGRP. If you fail to configure that command on the interface, the network cannot advertise, so, cannot be learned by its neighbor. While EIGRP for IPv6 is configured on the entire interfaces, the log messages will inform that an adjacency is formed. 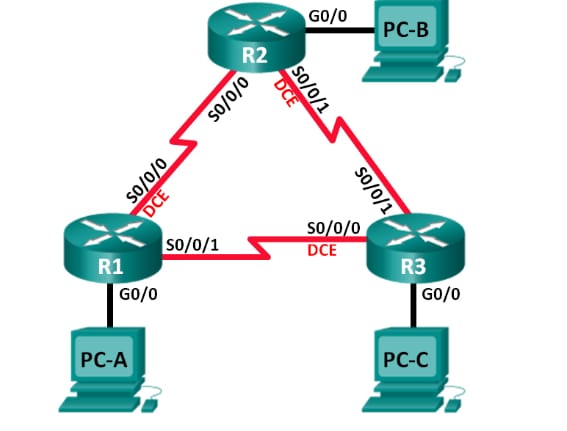 Build a network and check the connectivity:

Set up the network topology and just configure the basic settings such as device access, passwords and an interface IP addresses.

Configure the EIGRP for the IPv6 routing:

1. Enable the IPv6 routing on a router

2. Assign the router ID of the each router

To start an EIGRP for IPv6 routing configuration process, provide command as ipv6 router eigrp 1, where AS number is denoted as 1.

The EIGRP for the IPv6 needs the 32 bit address for a router ID. Then use the command router id to configure a router ID in a router configuration mode.

3. Enable the EIGRP for IPv6 routing on every router

An IPv6 routing process is the shutdown as default. Then provide command of no shutdown to enable the EIGRP for IP version 6 routing on entire router. 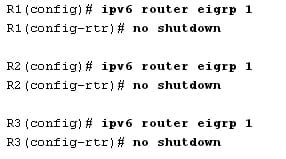 4. Configure the EIGRP for IPv6 by using the AS 1 on a gigabit Ethernet and serial interfaces on a router.

Provide a command of ipv6 eigrp 1 on an interface which participate in an EIGRP routing process. An AS number as 1 will assigned in the step 2. The R! configuration is as follows:

Assign the EIGRP participating interface on r3 and R2. You can find the neighbor adjacency messages as an interface is added to a routing process of EIGRP. Given below is the R1 messages.

Verify the end to end connectivity

Verify the EIGRP for IPv6 routing:

On the R1, provide the command show ipv6 eigrp neighbors to verify that an adjacency has been accomplished with their neighboring routers. Then the link local address of a neighbor router displayed in an adjacency table as follows:

Use the command show ipv6 route eigrp to demonstrate the IPv6 certain EIGRP routes on the whole routers.

The example as shown below: 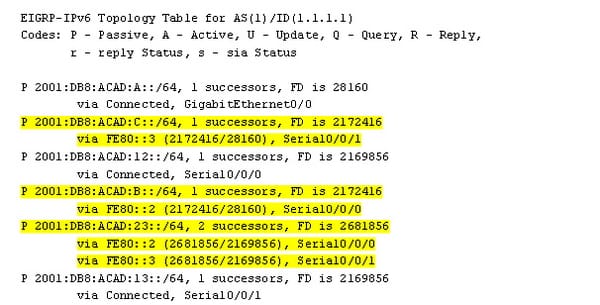 4 . Verify current state and parameters of an active IPv6 process of routing protocol

Provide the command show ipv6 protocols to verify a configured parameter. In the output, the EIGRP is a configured IPv6 routing protocol along with 1.1.1.1 as a router ID for the R!. The routing protocol is also associated with an autonomous system1 with 3 active interfaces such as S0/0/1, S0/0/0 and G0/0. 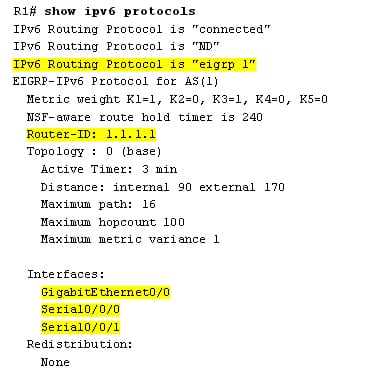 2 . Verify the configuration of the passive interface

Provide the command as show ipv6 protocols on the R1 and verify it G0/0 is configured as passive interface. 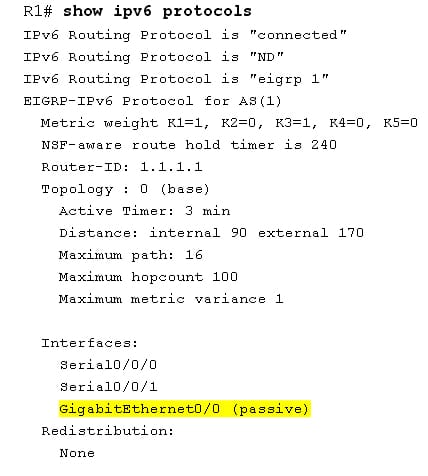 Configure all the interfaces as the passive on R3 as follows:

A neighbor relationship has been accomplished again with the R2 and R1. Then verify it only G0/0 is configured as the passive.

The EIGRP for IPv6 uses a same concept for the hold timers and hello as like EIGRP ipv4. The command is used to set that parameters have to be used in the global configuration mode. To set the parameter separately for the IPv6 and IPv4, the IOS uses an IPv6 keyword for the EIGRP IPv6 command and an ip keyword for an EIGRPv4 command.

Once the 2 EIGRPv6 routers become the neighbors, it will exchange all the appropriate network topology information. The EIGRPv6 uses the bandwidth, reliability, load and delay as the metric components like the EIGRPv4. A metric calculation formula which is used by the EIGRPv6 is identical to the EIGRPv4. The best path to the network is called as the successor route to the EIGRPv4 and the EIGRPv6 retains the concept. The feasible successor is the route which mets a feasibility condition and potentially will become a successor path suppose the route of the successor fails. The IPv4 and IPv6 of EIGRP both have a feasible successor concept. The feasibility condition will dictate that a reported distance is better than the current metric to reach a same subnet.

The EIGRP for IPv6 is the distance vector routing protocol with the same link state features. It can be configured directly with the router interfaces also. The EIGRPv6 will exchange the messages allowing a router to discover neighbors, and from the neighbor relationship as well as advertises the subnets along with a metric component for the every route. The EIGRPv6 has the same successor as well as feasible successor concepts. From this section you can learn how to configure and verify the EIGRP for IPv6. After the configuration, it is very important to very the EIGRP for IPv6.