The border gateway protocol is the standardized exterior gateway protocol proposed to exchange routing and the reachability information between the autonomous systems on the internet. The BGP neighbors are called as peers. This peer is established by the manual configuration between the routers to create the TCP session on the port. The BGP speakers sends the 19 byte keep alive message for every 30 seconds to maintain the connections. Among the other routing protocol, the BGP is very unique in using the TCP as the transport protocol. In this chapter, you can learn how to configure and verify the BGP peer relationship and authentication.

The peer group is the set of the BGP neighbors which shares a same outbound policy, when the inbound policies are different. The iBGP peers will receive a same update all the time, creating it ideal for arrangement for the peer group. The advantage behind this ease configuration is the fact which updates are generated once per peer group. The BGP peer groups are mainly used to improve the performance and to simply the configuration. The other advantage of using this BGP peer group is in the reduction of the resource by the routers when it makes the updates to the BGP neighbors. It also reduces the amount of configuration which requires to be done on a router and also centralize the BGP administration.

How to use peer group:


Follow the below steps to create and use the peer group:

Enter the command neighbor ip-address peer-group group name, which will make the neighbor to be a part of the peer group.

You can reset the connections to the member of the group by using the command clear ip bgp peer- group group name. 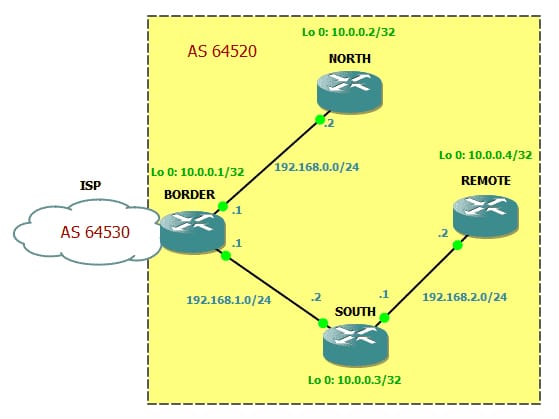 In the same way, if 2 routers have the different password configured, the message will be like the below:

The routing protocol is mainly used to exchange the routing information across the internet. The BGP is the inter autonomous system routing protocol. In the active state, it was unable to accomplish the successful TCP connection with the peers. The BGP peers ignore a start event. And reset the connect retry timer.

The BGP routing process tries to accomplish the TCP session with a peer. If a session established successfully, then open message is sent to a peer, a hold timer is set to the largest value and a local router transition to an open sent state. If the TCP session fails to establish, then a local router will initiate the other session, set the connect retry timer.

A Neighbor with a lower IP address can establish the connection to a remote peer on the TCP port with the random source port. In that case, a remote peer can become the server as well as the local peer can become the client. This relationship of peering can change when clear the BGP process on the either peer or underlying BGP connections get served for some reasons. The IOS will support, if you want to set one peer as the client and one as the server. 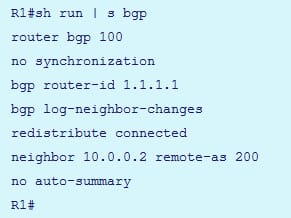 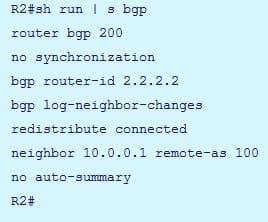 Redistributed the connected routes to ensure that the BGP is in exchanging prefixed. Given below is the BGP connection information.

R1 is the client and R2 is a server with a local port 179. In the below session, peering arrangement is changed from R1 being a client to server.

In the case, if the hard core the one peer as a client and the other as a server. It is possible under the IOS. When you have some kind of the firewalling on peer side or set which neighbor has to become a server and which one has to be a client. It can accomplish under a neighbor statement and configuring R1 as a server and R2 as a client.

Active being a client

Passive being a server

Here, the server/ client relationship is not changed.

In order to make the decisions in the operations with the peers, the BGP peer uses a simple finite state machine which consists of 6 states. Foe each peer to peer section, the BGP implementation maintains the state variable. The BGP times are such as hold down and keepalive timer intervals. By default, the keepalive timer is 60 seconds and the hold down timer is 180 seconds or 3 times keepalive. The BGP defines the messages that each peer must exchange in order to exchange a session from one state to the other.

In this state, the BGP refuses all the incoming BGP connections. In response to start the event the local system will initialize all the BGP resources, initiates the transport connection to other BGP peer, starts the connectivity timer when listening for the connection which can be initiated by a remote BGP peer and also changes the state to connect. No resource is allocated to a peer. The exact value of connectretry timer is the local matter, but must be sufficiently large enough to allow the TCP initialization.

If the BGP speaker detects any error, then it shuts down the connections and changes the state to Idle. In this, getting out of an Idle state needs generated automatically, persistent BGP errors can result in the speaker persistent flapping. To avoid this condition, it is highly recommended that start event must not generated immediately for the peers, which was previously transitioned to the Idle due to the error. For the peers that was transitioned previously to idle due to error, a time between the consecutive generation of the start event, if that event is automatically generated, shall increase exponentially. The initial timer value shall be sixty seconds. The time can be doubled for the each consecutive retry. In this state, any other events received in this Idle state is mostly ignored.

It waits for the successful TCP negotiation with the peer. The BGP will not spend more time in this state, if a TCP session has been established successfully. It sends an open message to the peer and changes the state to opensent. If a transport protocol fails to connect, a local system restart a connectretry timer, then continues to listen for the connection which is initiated by a remote BGP peer and also changes the state to an active state. The start events are ignored in an active state. The local system releases all the BGP resource associated with the connection and also change the state to idle in response to any of the other events. If an error occurs, the BGP moves to an active state. The reason for the error includes TCP port 179 is not open, the random TCP port over the 1023 is not open, the AS number configured mostly incorrectly on either router and the peer address configured mostly incorrectly on either router.

If a router was unable to accomplish the successful TCP session, it ends in an active state. The BGP finite state machine tries to restart the other TCP session with a peer end, if successful, it sends the open message to a peer. Suppose it is again unsuccessful, then the FSM is reset to an Idle state. The repeated failure will result in the router cycling in between the active and Idle states. In that, reasons include the flapping network interface, network congestion, TCP port 179 is not at all open and the random TCP port over the 1023 is not open.

In this state, the BGP finite state machine for the open message from their peers. In that, once the message has been reached, a router checks the open message validity. If there was an error, it is due to any one of the field in an open message will not match in between the peers. The examples include ND5 password mismatch, BGP version mismatch, peering router expect the different my AS and much more. A router will sends the notification message to a peer which will indicate the reason for the error. If there was no error occurred, then a keepalive message is sent, different timers are set and a state is changes to the openconfirm.

The peers sends the update message to exchange the information about the each route being advertised to a BGP peer.

Most of the internet service providers have to use the BGP to accomplish the routing between one another. The BGP is one among the most important protocols of the internet. When the BGP runs between the 2 peers in a same autonomous system, it is referred as the internal BGP and when it runs between the different autonomous systems, then it is referred as the external BGP. The BGP is the glue which connects the internet together. It is suitable for indicating liveliness in both the directions. It gives you the idea about active and passive BGP and states and timers of the BGP.