Describe the concept of ROUTE maps

The route maps are like the duct tape for a network. It is not important because it can be used to mend or fix something broken, however, it can be applied to the numerous situation to overtake many issues. It is not the prettiest solutions, but it will be very effective. This route maps are like the "Then ... IF..." statements of various programming languages. "If" the specific condition is true and "then" will do something. The route maps enable to define routing policy which will considered before the router will examine the forwarding table and therefore it can define the routing policy which takes the precedence over the various route processes. Let us see the concepts of the route maps and how powerful it is.

They are generic mechanism. The match interpretation and criteria matches are dictated by applying it. Then the same route maps applied to the various tasks may be interpreted differently.

There are few differences between the ACL and route maps are as follows:

The route maps are very flexible than the ACL and it can verify the routes based on the criteria that ACL will not verify.

The result from an evaluation process of the access list is the no or yes answer. The ACL will either deny or permit the input data. When applied to redistribution, the ACL determines if the specific route can or cannot be redistributed. The typical route map is not only permitted the redistributed route and also modify the information which are associated with the route, when they are redistributed into the other protocol.

The route map frequently uses the ACL as the matching criteria.

Given below is the route map logic:

In the nutshell, the route maps will work in the below manner:

This process is whether it is the redistribution process, some other process or policy routing such as NAT- network address translation will call the route map by the text based name. Then the route maps, in turns have the match statements or conditions, that are usually, but it is not always, the extended list or access list. The BGP may match on ASN- autonomous system number or any different attributes. In case, the route maps function during the redistribution as follows:

The below one demonstrates how the route map is applied during the redistribution: 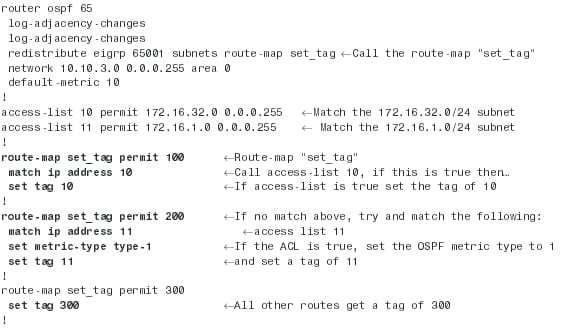 The route map is mainly used to control as well as tag the route from EIGRP when it is redistributed into the OSPF. While processing the OSPF redistribution, the route map titles as set_tag is called there. A route map comprises of 3 parts. The 1st part calls the ACL- access control list 10, that will permit the 172.16.32x network and set the tag of 10. Then the 2nd part calls the ACL 11, that in turns matches the 172.16.1.x IP address. If the match occurs, then the metric can be set in such a way that the route is redistributed. Then it turns into the OSPF type route 1 and finally the tag has to be set to 11. Then the final or 3 rd part of a route map cannot call the ACL, hence all the routes are matched as well as the condition of the set will be applied. In this case, the routers are setting the tag in 300 and you can set the tag to help the network document or else use the tags to find routes which you like to perform or filter some other action.

The route maps have some common characteristics such as;

Configure any AS_Path, ACL or any match criteria which the route map can be used in a match command. It should be the first, so that you will not call an empty AS_PATH list or ACL.

This step defines a match criteria as well as configure the statements of match which can be used in the single instance of the route map. In case, the absence of the match commands, the entire routes or packets are matched here.

It is the optional step. It defines a set criteria as well as configures set statements which are used in the single instance of the route map. You can also do with a route map configuration set command.

Again, it is the optional step. Configure any AS_PATH, ACL or any match criteria which a route map can use the match command.

Apply a route map, based on the application of the route map, it may be applied in so many ways. Some more common application, such as route redistribution, BGP and PBR.

In the above configuration, 3 primary commands are used to configure the route maps such as a route map command, set commands and match commands.

Here, the route_map_name is also called as the map tag. It is the text-based route map name. In that the name is logically grouped and unique as well as defined all the route map policies. It is the name which is used to call a route map during the process and redistribution. The deny and permit keywords are always optional and a default keyword is permit. If a route map is called from the redistribution process, then the keywords are set to permit and a match criteria are met for a route map, a route is redistributed. If a keyword is set to deny, in same criteria, then a route might be denied. Suppose a route map is called from the policy routing statement, then match criteria is met for route map as well as a keywords are set to permit, then the packets might be policy routed. If a deny keyword is used, hen the packets are forwarded based on the normal route processes.

In short, it is the process called the route map by the text based name.

A route map has specific match statements or conditions. It is usually an extended access list or access list. This command also enables you to define the route map criteria. You can also match commands to call the ACL to compare the routes. The match statement can also match the route type, packet length or route tag. In the IP networks, the command enables to match the routes which have the network address matching 1 or more in the prefix list or specific ACL. Use the standard, expanded or extended range ACL. Then the next hop keyword will enable to match the routes which has the next hop addresses matching 1 or more in an ACL. It is most primarily used in the BGP.

The route map is the one which helps in defining the routing policy which will be considered before a router examines the forwarding table. However, it is considered as the perfect solution for the problem, it offers the effective solution which can be applied to different situations to solve the various problems. The configuration of the route maps and its valuable 3 commands are explained in detail. The concepts and characteristic of the route maps give you the idea about the route maps.