The CEF is referred as a Cisco express forwarding. It is an advanced one in layer 3 switching technology, which is mainly used in the internet or else core networks to enrich the overall performance of the network. However, CEF is the Cisco proprietary protocol, remarkable vendors of the high capacity or multi layer switches provides a similar functionality at where the layer 3 routing or switching is taking place in the hardware rather than the CPU or software.

The CEF is most often used to improve the speed of the packet switching by deducting the overhead as well as delays which is introduced by means of other routing techniques. This CEF also optimizes the scalability for the networks with a dynamic and large traffic pattern. It offers the capability to switch the packets via device in an efficient way when keeping the load on a router processor as low. 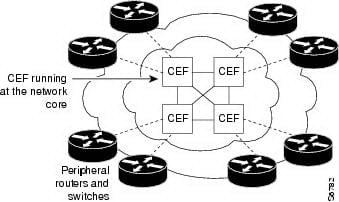 The CEF is mainly made up of 2 different main components such as FIB and Adjacency table. Those 2 components will updates same time automatically as a routing table.

The routing itself will not truly optimize for the rapid look ups. It mostly comprises of lots of information which is crucial to its construction, however, it is not so essential for the routing lookups like administrative an origin distances of a route, their ages, metrics and much more.

The FIB is referred as a forwarding information base. It contains the destination reachability details and the next hop details. This detail is mostly used by a router to decide the forwarding decision. Then the FIB is mainly organized as the multiway trie that allows for easy lookups and very efficient. Within the FIB and the routing table there will be a one on one relationship will exist between the routes.

The CEF uses this FIB to make the IP destination based switching decisions. It is conceptually very similar to the information base, or routing table. It also maintains the mirror of a forwarding information in an IP routing table. When a topology or routing changes may occur in a network, a routing tables are updated as well as those changes will reflect on the FIB.

All the FIB entries will describe that the networks are reachable through specific next hop point to a similar entries of the adjacency table that may contain intended egress information and layer 2 header towards the next hop.

The routes may have mostly more than the 1 path per entry, allowing it possible to use the CEF to switch the packets when loading over the multiple paths. Additional to the next hop of the interface adjacencies, few exception adjacencies will exist to expedite the switching for a non standard condition.

Typically a router has only the handful neighbors, a next hop into all of the known destination. All destinations are reachable via a specific next hop are using the similar layer-two rewrites information and to reach any networks behind the specific adjacent next hop, then the packets may be encapsulated towards the frame which has the similar layer two headers addressed and also sent out the same egress interfaces. Once the perfect entry is chose, encapsulating a packet, and forwarding that out the egress interfaces will be done in an effective rapid way, as the required data are available readily.

The initial impact of this flooding is that all the hosts connected to that virtual LAN receive the traffics. If 2 of the 10gig servers are communicating and also the asymmetric routing is happening. If there are 100mbps hosts on the similar switch, then it is allowed to receive all the server traffic, effectively suturing a link. The STP topology change notification - TCN causes the forwarding table to age out faster than its normal timers. Suppose, the flapping link causing the STP re-convergence, it may cause some excessive unicast flooding. The configuring port will quick on all the edges of the interfaces which limits the TCN. The local area network switches use the CAM table to forward the frames.

The CAM overflow is one among the cause which is unlikely naturally happen in the modern switches, as it is usually sufficient memory to facilitate the requirements of the most networks. Although, the CAM overflows attack will be caused maliciously. While MAC address table grows large which it exceeds the content addressable memory size, then no recent MAC addresses will be learned that causes a unicast flooding. It can be protected by means of the port security.

The selected port can also be blocked from the unicast flooding with the help of switchport block unicast. It can be desirable in the highly safe networks and also where the PVLAN are used.

The out of order is one among the general network challenges. In that, the time sensitive UDP application doesn't buffer the packets for a very long, so that they don't cope well with the reordering packets. An excessive packet rearranging in the TCP may cause the receiver to send the duplicate of ACK to trigger the retransmit fast. It might cause an excessive overheads in both the bandwidth and CPU, and also causing the sender to decrease the window size. A Receiver has to buffer as well as reorder packets and at the same time its takes memory, CPU cycles and time.

Out of order packets is the well popular phenomenon that the packet order is inverted over the internet. It can also be caused by per packet of the load sharing algorithm. It can affect the receiver's slow TCP sessions and network's re-transmission.

It causes the unnecessary retransmissions: when a TCP receiver gets the out of order packets, it delivers the duplicate ACK to trigger the retransmit algorithm most fast at a sender edge.

This also reduces the receiver efficiency: the TCP receiver need to hand in data to high layer in particular order. When the reordering happens, the TCP need to buffer the entire packets of out of order until receiving all the packets in the specific order. At the same time, the higher layers will get the data in burst instead of smooth, which reduce the efficiency of the system as a whole.

An asymmetric flooding is the when the return traffics take a different path via the network instead of the forward path. It can cause problems with the NAT as well as firewalls and among other things too. If any one link is higher delay or highly saturated, then the asymmetric routing may cause huge problems with the jitter and delay. It may cause unicast flooding too. This asymmetric flooding is considered as the major network challenge among all other types. Large amounts of flooded traffic may saturate low bandwidth links which cause the network performance problems or completely connectivity outage to the devices connected along such a low bandwidth link.

In short, a packet traverses from the source to the destination in 1 path and returns in a different path when come to the source. It is most commonly takes place in the L-3 routed networks.

This asymmetric routing is more common in most of the networks, larger networks too. It is an undesirable situation for most network devices such as VPN, steelhead appliances and firewalls. Those devices will rely on viewing each packet functionality.

It can also occur in the smaller scale. It can take place in the situation where the organization uses the 2 different routes such as leased line and VPN for instance. This will cause different issues in the fullcluster environment which mainly depends on the type of firewall running along with the fullcluster.

The Asymmetric routing problems have long been depends with the routing designs which involved packets flowing through the firewall. The asymmetric routing support in the firewall changes the prior design philosophy. This support with the other new features may be leveraged for getting greater scalability as well as redundancy in the traffic passing via the infrastructure of the firewall.