The Internet protocol is referred as the IP in short. The IP is the principal communication protocol in an internet protocol suite for relaying the datagram across the network boundaries. In the below, the different basic IP operations are explained in detailed. It includes the ICMP reachable and redirects, IPv4 and IPv6 fragmentation and the TTL. By learning these tools, it is easy to handle the things in the networks and helps to troubleshoot or avoid it.

The IP is moreover responsible for addressing the hosts and also for routing datagrams from the source host to the destination host over 1 or more IP networks. Especially, for this purpose, this IP defines the format of the packets and also offers an addressing system which has 2 functions such as identifying hosts as well as offers the logical location service.

The IP is technically referred to the internet protocol, or transmission control protocol suite. This TCP/IP protocol suite also divides the complex tasks of the host to host inter networking in the layers of the abstraction, with every layer representing the function performed when the data is transferred between the cooperating applications over the inter networking environment.

1.3.a ICMP unreachable and redirects

Perhaps the best popular example for the ICMP is a ping utility, which uses the ICMP probe remote the hosts for the responsiveness and the overall probe message of the round trip time. It also supports the traceroute, which will identify the intermediate hops in between the given destination and a source. This ICMP is defined in the RF 792.

The ICMP offers troubleshooting facility as well as error reporting for the packets which are undeliverable. If the IP is unable to give a packet to a destination host, then the ICMP will send the destination unreachable messages to a source host. 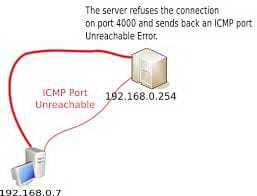 The internet protocol is used for the host to host service of the datagram in the interconnected network system called the Catenet. Then the network, which connects the devices is known as gateways. These gateways will communicate in between themselves to control through the gateway - gateway protocol. Rarely, the destination host or gateway will communicate with the source host. In that case, the ICMP is used mainly. Although, it is an integral part of the internet protocol, and it must be implemented by each IP module.

The ICMP messages are most sent in many situations such as: when the gateways directs the host to send the traffic on the shorter route, when a gateway doesn't have buffering capability to forward the datagram and when the datagram can't reach its own destinations. The IP is not simply designed to be a perfectly reliable. The main purpose of the control messages is to give the feedback about the issues in a communication environment, not simply to make the IP reliable. However, there are no guarantees that the datagram may deliver or control message may return. Some of the datagrams can still unreachable without any reports for its loss. Then a higher level protocol which uses the IP must implement its own reliability procedures if the reliable communications are necessary.

ICMP redirect messages are most often used by the routers to indicate the host on the data link that the best route is greatly available for the specific destination. In case, the 2 routers such as R1 and R2 are connected to a same segment of Ethernet as the host H. Then the default gateway for the Host is configured to use R1- router. The host sends the packet to the R1 to reach a destination on the branch remote office host. The R1, after it consult the routing table, it finds that next hop to reach the host office. Is the router R2. Here, R1 will forward the packet out of the same interface of Ethernet on which it is received. The R1 forwards a packet to R2 and send the ICMP redirect messages to the host 'H'. It informs the host-H that the best route to reach the Host office is by through R2. The H - host will forward the entire subsequent destined for the host office to R2 router.

The IP implements the datagram fragmentation, which breaks it into smaller pieces during transit, so the packets can be formed which can pass via the link with the smaller MTU- maximum transmission unit than the original datagram size. Nowadays, IPv6 and IPv6 are widely used among different things.

There are a couple of the control field in an IP header to establish the fragmentation. The flags will imply if there are a number of fragments follows, or if it is the last fragment. Then the fragment offset indicates the fragment position in the original datagrams. The identification fields are responsible to identify each unique fragment of the datagram which is original.

Each and every network has its MTU. The MTU value mainly depends on the network and protocol types which it is used. The maximum transmission unit declares the largest possible packet, which is allowed to send on the network and also it respected always by the entire devices and hosts which transmit data on the network.

The IPv6 is the next generation in the internet protocol, which is incompatible with the IPv4. In recent days, IPv6 deployment has reached the stage that the entire world, there are so many IPv6 enabled networks, large or small, which are divided from each other by an intermediate routers which knows only the IPv4. This type of networks is known as the native IPv6 networks. It is interconnected by means of IPv6 over the IPv4 tunnels, then it become the global IPv6 internet. Today, both the IPv are widely used to connect the largest regional IPv6 network, because this is relatively tough to construct the cross continent or international native IPv6 network. It makes the characteristics of the IPv6 over the IPv4 tunnels more essential to the global performance of the IPv6 internet.

The MTU is the most essential concept in the packet switching systems. Path MTU equals to a smaller MTU link on the path from the source to destination. This MTU link will vary in the internet due to the variety of networking technologies of the IP layer.

TTL (time -to- live) is the value in the IP packet, which tells the network router whether the packet has been in a network very long or not and that should be discarded. For a variety of reasons, the packets cannot get dispatched to its destination in the reasonable time period. For ex: the combination of the incorrect routing table can cause the packets to loop without an end. The solution is to mainly discard the packets after a particular period of time and also send the message to an originator who decides whether the packet has to resend or not. The initial time- to- live value is set, as a default by the system, in the eight binary digit of the packet header. The real ideas behind the TTL was, it would specify the specific span of time in seconds when exhausted, and it would cause the packets to be discarded. Hence, every router is needed to deduce minimum 1 count from the field of TTL, then the count is mostly used to mean the total number of the router hops the packet is permitted before it discarded. Every router which receives the packets deduct 1 from the TTL field count. When this count reached zero, then the router deducing it discards the packets and also send the ICMP message back to an originating host. The default TTL value for the windows 95/98 is 32 hops. Some of the users will recommend to change it to 128 instead of 32, if they have difficulty to reach the specific sites.

The traceroute and the ping utilities will make use of the time-to-live value to try to reach the given host computer/ trace a route to that specific host. The traceroute will send the packets intentionally with the low TTl value, hence it will be mostly discarded by the each successive destination path router. The actual time lies between the sending the packets as well as receiving back the internet control message protocol message which was discarded, it is used to determine the successive travel time of the hop.

With the help of the multicast IP protocol, the value of the TTL implies the range or scope in which the packet might be forwarded. By convention as follows:

128 → restricted to a same continent

64 → restricted to a same region

32 → restricted to a same site

1 → restricted to a same subnet

0 → restricted to a same host.

In the above, the basic IP operations are explained greatly which comes under the network principles. With that, the ICMP reachable and redirects will help to learn about the unreachable and redirect messages to the client, the IPv4 and IPv6 fragmentation helps to avoid the issues. Finally, the time-to-live is the special value in the IP packets which is also widely popular among the network.