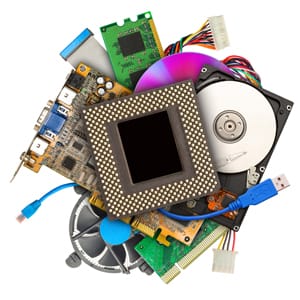 A hardware problem or issue is one of the most dreaded incidences for a computer user. This is due to the fact that such a malfunction can result into complete computer failure. With respect to this, it is considered very important for an individual to be conversant with all the available troubleshooting tools. In addition, one should ensure that he or she is familiar with the indicators or symptoms of a hardware failure so as to curb it in advance. Below is a brief description of some of the most common hardware problems and their resolutions.

Here are some common symptoms through which one can know if the hardware has got some problems or not;


Unexpected shutdowns occur when a computer just turns off without making any notification or giving a message. This is a problem that can be very frustrating since it can lead to loss of unsaved work or even interruption of a session one are logged onto. In most cases, such a problem occurs due to possible system changes such as addition of a new hardware driver. In such an occurrence, the operating system is not completely stopped and one can press the NUM Lock key or Ctrl+Alt+Del to try and get back to the OS for recovery.

In case that fails, one can run some hardware diagnostic tests so as to have a thorough check of anything that could be interrupting one's system. One can perform the Power on Self-Test (POST).


System lockups can be very frustrating especially if they occur without the display of an alert message. The screen appears as if it is frozen. Looking at the Event viewer can be good but in such problems with one's hardware, it may not be of much help because the Event Viewer has nothing written on it.


The Power on self-test occurs when one's computer is immediately powered on to check for one's computer's minimum hardware configurations. POST code beeps are normally delivered via the system speaker and serve as a communication media when the video is not working. Each beep has a correspondence to a specific error message.

Blank screen on boot up


A blank screen on boot up is another dreaded problem that does not necessarily indicate a problem with video but one associated with configurations of the BIOS. In such a case, one may choose to make BIOS modifications so that instead of using a separately installed video card, one can configure the BIOS to utilize the in-built one and identify some of the problems occurring.


Unplugging one's computer or powering it off does not lead to lose of computer configurations. At times, the BIOS configurations may keep resetting and getting erased due to the CMOS battery on the motherboard getting spoilt or it no longer being charged. In addition, one may also receive some prompts indicating an invalid configuration or incorrect date and time setting. In case of such a problem, replacing the CMOS battery can be the best way to come up with a resolution for the problem. One can also decide to carry out a complete clearance of the BIOS configuration which should be done in accordance to documentations by the manufacturer.

Attempts to boot to incorrect device


At times, one may see attempts by one's computer to boot from the wrong device for instance when one are using an external USB and the computer system attempts to boot from the USB instead of the internal drive in the computer. The boot order of one's computer can be set at the BIOS where one decide the particular drive to start up or one may alter the order in which the boot process occurs. With such a problem at hand, one should take a look at one's BIOS configurations and possibly modify them in a way that is ideal for one's system.


This is a problem that mostly occurs in instances where one's computer keeps looping over the start up process where it appears to be starting and then restarts. In such a case, the first step should be to try and establish the occurrence point of the problem either in the course of the BIOS check where the Power on Self-test is undergoing among some other possible reasons. Once that is established, then one can easily decide if the problem is hardware related or related to the Windows configuration.


At times, one may turn on one's computer and nothing of much significance happens. This should therefore reflect to the possibility of some power related issues in one's computer. Use one's Multimeter check so as to see if there is some power coming from the wall socket. Also ensure that the motherboard is powered which can then help in identification of the problem in one's computer.


One's computer tends to emit a lot of heat due to the numerous numbers of components running in it and generating the heat. In case of an overheating problem, then urgent cooling is required. One can induce cooling by using some fans to bring in cool air into one's computer. In this case, the fans can be passed over the warm equipment making the heat to rise up and allow the cool air to pass in much faster.

One can also do some troubleshooting or maybe clean one's system. Make an effort to ensure that there is proper spinning of the fans, clear dust and restart one's system to check if such a heat problem occurs. With that, one will be able to accurately determine the occurrence point of one's problem.


A computer should not be a source of too much noise>. The only noise allowed is just a little humming of the fan. Noise inside the computer case could result from some loose components inside it. Such noise can be heard when trying to move one's computer between two different locations. Some scraping noise from the inside case could be an indicator of the hard drive going bad. Some of the odd noises one will hear in such cases call for immediate backup of one's stuff in the drive.

There may also be some clicking noises which relate to fans not working properly or getting spoilt. Such noises can also indicate that the fans spinning rate is too fast. Such noises should be resolved with immediate effect so as to ensure that one's computer's cooling system is in good working condition.


This can be a very frustrating issue whose occurrence is not specific on execution of any activity but just random. Such a problem could translate into the possibility of a hardware problem and therefore a comprehensive hardware check should be the first step to handle this. One should also take a close check at the software drivers since a software driver that is poorly written can be the cause of such a problem. Ensure that all the software drivers are the latest versions.

Fans spin - no power to other devices


Indicator lights are normally associated with some computer components for instance the network adapter or a sign that the power is on. With these lights, one can easily determine if the component associated with them is working. In case the lights are not working or functional, that should immediately translate into a faulty component. 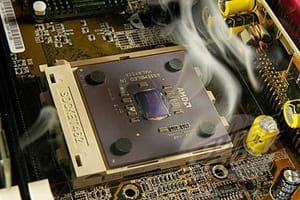 It is said that smoke being emitted by one's computer is what keeps it running. However, the smoke released is not too much to be seen. In some cases, one might smell some smoke or bad odour coming from one's computer. This should be a clear indication that there are some electrical problems in one's computer. This therefore calls for immediate disconnection of the power source but to be much safer, unplug the power cord behind one's computer.


A burning smell from inside one's computer is also another problem to call for alarm. This means that one should open up one's system and check for any blown capacitors. In addition, check for any component on the motherboard that appears to be black or not alright. On completion of a visual check, one should run a hardware diagnosis so as to establish the source of the burning smell. Make a comprehensive check on every hardware component of the computer so as to be sure that such a problem will not arise in future.


The blue screen of death also known as the Windows Stop Error is quite dreaded since it completely stops everything and it is only a reboot of the system that can get things back to normal. With the information displayed on the screen being of utmost importance, one should write it on an Event Viewer so as to determine activities that happened in the past. With the Event Viewer tracking down of the exact point the problem occurs becomes quite easy.

Here are some tools which can be used for the fixation of hardware;


The multimeter is a special kind of device that one should be well trained to use especially if one are to handle electrical issues with one's hardware. This is a device that can be used to take resistance, current and voltage measurements. One should make sure that the right kind of Multimeter is what one has since this is a tool that must be highly accurate when taking any kind of measurements. One should settle on one that is very easy to use and with a lot of clarity. High levels of accuracy should also be considered. The multimeter can be used to check alternating current voltage. One can also use it to check the direct current so as to ascertain that the voltage to the motherboard is okay and also ensure that the CMOS battery is fully charged.


A power supply tester is a tool that is very easy to use since it bears a perfect display on its front where power can be plugged directly from the power supply. Plugging other components into this device can give one voltage statistics and information concerning what one have plugged in as well as the voltage they are using.


The power on self- test card becomes of much importance the moment one start-up one's computer and one get nothing from it. This card looks at the power and issue detailed error messages to help one discover more concerning one's hardware problems.