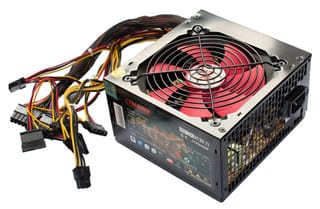 Connector Types and their Voltages:

SATA: The storage devices that one can find in the computers also need some power supply. The power supply connection that is made to it isn't an ordinary one, like it cannot have the 4-Pin connector. There is the SATA power connection which can be used to empower the SATA drive. This connection can give power to the latest SATA drives and the ones which came out in the transition period of SATA. The standard power connection for the SATA can be seen at the far left side of the drive. But, if one has only the Molex connector, then it might allow one to use that connector as well. The latest SATA does not drive nor normally have the SATA connection which is only one. That connector is very specific and the SATA drive is the only device which can use this type of connection.

Molex: It is the most found connection type in a computer. It is the simplest connector and has the 4 Pin Power. The name has been given to this connection due to the manufacturer who builds this connector. The Molex is actually a very large organization and it has created many connectors but the connections which can be found in the computers now have moniker of this Molex connector.

4/8-Pin 12v: The 4 Pin connection is also known as the Molex connection. It is one of the most common types of connector that is being used in the computer. The connector has some shapes, like it is actually slanted form one side so that it can be fit into the power connection which has the exact size. Normally, these power types are used for empowering the peripherals that are inside the computers, like CD ROM. Many of the fans also get connected to this specific connector. One can find this connector at many places in a system since it is very common now. Here, also one can find the 8 Pins connector. This is called the EPs12 volt. This power supply is the entry level and it has been designed specifically for the servers and those devices which have some multiple purposes. Also, if a processor has multiple cores which needs lots of power, then this connector is used there as well. Since there are 8 pins connected with it, the power flow is great. One might also find them on the motherboard with the injunction of the 24 Pins connector.

PCIe 6/8-Pin: The motherboard isn't the only part of the computer which demands the great amount of power. The PCIe sometimes have more connections on it, so that it requires more power as well. Also, there are some 6 Pins and 8 Pins power connectors which are specifically designed for the PCIe and they directly get connected to the connectors on it. Hence the great amount of power can flow through PCIe. The 6Pin connector actually has power of 75 watt and the 8 pin connector contains the power of 150 watt. The reason why PCIe needs too much energy is that it has the video cards and if the video card is the powerful one, it would require a lot of energy. Also, there are many processors which are connected to the card and some fans are connected there as well which help cooling up the heat generated by the card. If one takes a look at the top of a video card, he would find the connectors there. Here one can connect more connectors if the PCIe card needs more energy. So, the card itself too has a connector as well and needs direct energy.

20-Pin: the 20 pin connector was used to be used in previous time when the standards weren't so high and the power wasn't needed that much to keep the system running. Now since the tables have turned, the more power is required and now the usage of 20 pins connector is less. Now one can find the 20 Pins connector along with some extra 4Pins connector so that more power can be supplied to the devices so that they can perform up to the mark.

Floppy: The floppy drives are not used anymore. But if a computer has it, the connector type which is connected to it is somehow, very different. This unique connector is the 4 Pins connector and it is too small. Now, it is just call the floppy type connector and it is the generic name of it. It is sometimes also called as the berg connector. The reason why connector is so unique and small is that floppy drive requires some really small amount of power that's why the connector is only 4 pin. Due to its uniqueness, it's pretty easy to find out the right power connection and get it connected to the drive so that it can work properly.

When one starts checking out the power supplies which are there in the computer, there are many terms that would be faced by the person and he might even not know what they mean. The common example of it is, A. A stands for the Ampere and it is the unit of electricity which indicates that how many electrons can pass through the specific point in the given time. Ampere is denoted with word A. Here are some specifications which should be learned by one;

Wattage: There is an important term that one should know about. It is called 'watt'. It is actually the calculations of the fact that how many volt times amps come up to the total watts number. This power is the one that is used at all the particle places at any time. So, if one basically takes the total number of volts and the ampere which means how many electrons are being passed by and multiply them both, then the watts would be gained. So, the 60w power would be equal to the 120V and the 0.5 ampere electricity. One can find it written on many of the places of the power supply. The label for the power supply also mentions many of the volts and the amps which come from the various points. Also, it indicates that total power of 2000 watts is allowed to be flown into the computer at a specific time.

Size: The sizes of the connection have the great impact since many of the connectors vary in the size. There are several sizes available for a single connector so if one is going to get them connected, he should ensure that the either sized connector is being connected to the connection so that the right type of connection can be established and electricity can flow through it easily. The smaller motherboards would contain the small connections and hence the smaller connectors would be required for them. Number of Connectors: Another important thing that matters the most if the number of connectors which are available at a device. But since the power supply might vary, so one must chose the connectors very carefully so that the power demand is fulfilled and the device which is connected can work properly.

ATX: ATX is the type of a power supply. It is so standard and the shape and the size of it so standardized that one can easily find the ATX and can get it connected to where it was connected before. The standardization of the size and the shape allows the ATX connections to accept any ATX connector no mater whether it is new or not, it would surely be compatible. The power supply that one uses can have many various types of connectors and this connector allows the much hardware to get the power directly into them. Hence, when one buys the power supply, he should ensure that the size is same and there's the compatibility between and current and new connector. The power supply isn't so rigid; there are some pretty modular ones as well. ATZ is one of them. There are come connections which can be found on the back so that the standardized connections can be made and it depends on what is needed to have on the other side of the connector. Also, doing so can enable the user to minimize the cables which he has in the computer. Also, one can add or remove the vales and the type of the connector that one needs pretty easily.

Micro ATX: As it is known, the motherboards have the various sizes. So, if a motherboard is small, it is obvious that the size would be small as well. So, there is the need of micro ATX which has small size and can get connected to the motherboard quite easily. So, one should be cautious even with the ATX connectors since the sizes can vary easily.

This option actually means that the unit which contains this feature can operate on one of the two available power voltages. Many countries have the different voltages. Due to this feature, the manufacturers can market their products in the other country as well since the voltage can be adjusted by the dual voltage options. Hence, the user can select a specific voltage options and it can be done with the help of the small switch. Since the PC's power cord is tightened to the back of the case, some of them have a small switch here and the voltage is mentioned there like 115V or 220v. Here one can find the dual voltage option and can change the option himself.

After this all, one can get himself familiarised with the power connection types and can configure them himself. Also, he can try to unplug the computer, open it up and check the power supply connection and this can increase the knowledge level of a person. Also, one should know about the sizes and the number of the connector. Reason being is that if the size is different than the connector might not get connected at all or can get connected loose and hence the power supply won't be flown easily throughout the circuit. Also, one should check the documentations and know that what kind of the voltage the power supply should be having and can ensure that it is getting the same amount of power that it wants. Also, ensuring that all things are in the right place can help the computer getting powered on safely and successfully.